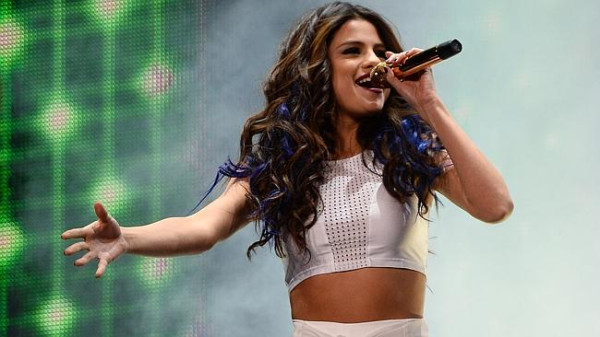 Selena Gomez has had to find a way to grow up in public and stay true to herself, writes Cameron Adams.

Immediately prior to interviewing US singer and actor Selena Gomez in her dressing room in Florida comes the warning: "You know you can't ask about Justin or Miley?" Actually, no.

But the elephant in the dressing room is addressed when she mentions her first trip to Australia.

"I went on the road in Australia with my ex-boyfriend," Gomez says. "I loved it. That's why I secretly wanted to extend this tour, to make sure I could go to Australia. I didn't get to do much last time, I'm probably going to be a complete tourist this time around."

The boyfriend in question was Bieber; that Australian tour two years ago was at the height of their relationship.

Gomez's first Australian tour follows her #1 album Stars Dance. It's generally a party album. Except for the party-killing ballad Love Will Remember, which Gomez wrote about her split with Bieber.

Lines like: "We used to be inseparable, I used to think that I was irreplaceable, we lit the whole world up before we blew it up. I still don't know just how we screwed it up," are the most she's said about their relationship in public.

"It's obviously about things I've been through," Gomez says. "That is the one way I would share something."

Gomez and best friend Taylor Swift made headlines when they were filmed backstage at the Billboard Awards in May. When the single Gomez went to speak to Bieber, Swift was caught on camera mock vomiting.

"I've become very paranoid (of cameras)," Gomez admits. "Half the time I didn't know I was being filmed, can I tell you now that I'm more aware of it!"

Gomez is more comfortable talking about her friend Swift.

"Taylor and I dated Jonas brothers together," she says.

"We met when she was 18. I was 15 or 16. She was so great to me. Then we became best friends. She would fly out to see me when I was going through something really hard.

"We'd eat a lot of fattening food and vent. I learnt a lot from her. She's an amazing musician.

"Everything I go through or say is filtered through her eyes and vision."

A former Disney star, Gomez has been criticised for being too nice, then blasted for grinding on a chair during the Stars Dance tour's performance of her song Birthday. She knows she can't please everyone.

"I'm 21. My first single off this record (Come and Get It) in the video the dance was very sensual. I have to be confident in my skin, I am a woman.

"I want to be proud of who I am and be confident in that, but at the same time remember the kids who like me. That's why I have that connection with that audience. I'm allowed to grind on a chair, I'm 21 years old, but I'm not telling them to do that. It's super-easy to me."

Kiwi teenager Lorde criticised Gomez for being anti-feminist for the lyrics in Come and Get It. Ironically, Gomez was covering Lorde's Royals in her tour. It's now been switched to Katy Perry's Roar, something she said was coincidental.

"I am a big fan (of Lorde), honestly." Gomez says. "I think she's doing something extremely cool and new. I'm stoked for her.

"I don't tear people down. I respect everybody's path.

The global tour has also seen the 21-year-old become an independent woman, growing up in front of the world.

"I've done this entire tour on my own, I didn't have my parents with me, I was completely single," Gomez says.

Not so much in interviews (where she follows Swift's lead in shying away from discussing her private life), but Gomez says she's already planning a more personal album next year.

Stars Dance captures different moments for Gomez, musically experimenting after falling in love with the electronic sounds of Skrillex and Avicii.

"I had four No.1 club songs before I was even allowed in the clubs," Gomez says. "I think I needed to experience a couple of things, I'm constantly doing that. Therefore, I'm going to have an outlet to say all of the things I need to say without it being processed for me."

Her first taste of indie films was another major creative turning point for Gomez this year - Spring Breakers by controversial director Harmony Korine, a film her mother recommended she sign up for. While she kept her clothes on, it shattered the perceptions that hang over from a Disney past.

"That's the kind of controversy I like to stir up," Gomez says. "You either loved or hated that movie. A lot of people wanted to know why I did that movie. But it was a way I made people feel something.

Gomez is in the tricky position of "transitioning" from child star. At Tampa, there's kids as young as five in the audience.

"I am who I am. I've tried to be other things and I don't know how to do it. There's a reason those little kids are still in the crowd. I respect the trust I have with that crowd. And the parents, they get it.

"Spring Breakers is rated R, kids can't get into a rated R movie. Done. "Then I did Hotel Transylvania, which is an animation kids got to go see. It's just how you carry yourself."