'Love Actually,' to Andrew Lincoln, is perfect: The actor looks back, 10 years later 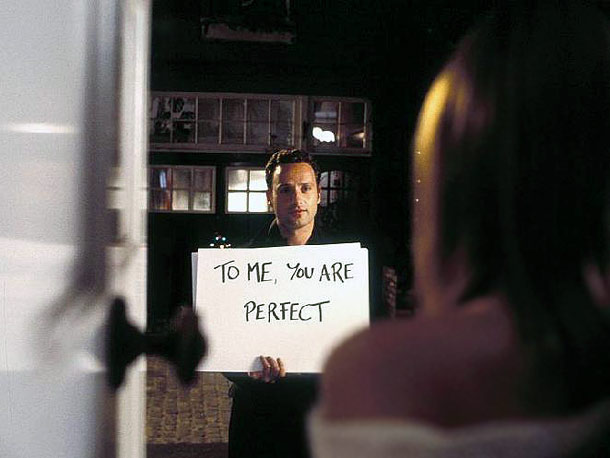 Ten years ago, Love Actually hit theaters, and with it came an endlessly re-watchable Christmastime collection of love stories that are actually, well, all around us. The film explored 10 separate vignettes — some heartwarming and hilarious, some tragic and heartbreaking – that saw its characters “get the sh–” kicked out of them by love. To celebrate the film’s legacy, we reached out to the film’s cast to talk about their storylines, and for the rest of the week, we’ll be sharing some of their behind-the-scenes takes.

Richard Curtis’ ultimate romantic comedy contained a treasure trove of iconic scenes: Hugh Grant as the prime minister dancing through the halls, young Joanna (Olivia Olson) singing “All I Want for Christmas Is You” at the end, Colin Firth’s Jamie and Lúcia Moniz’s Aurélia swimming in the pond to save Jamie’s work.

But one of the most iconic scenes from the film is undoubtedly the story of lovelorn Mark, played by Andrew Lincoln, who quietly pines for Keira Knightley’s Juliet, the wife of his best friend Peter (Chiwetel Ejiofor). For those who need a refresher, Mark visits Juliet after she awkwardly discovers the truth — and uses a stack of posters showing the words he can’t express out loud.

And though Lincoln now slays zombies as Rick on The Walking Dead, he had no problem reminiscing about his scenes in the film. The actor talked to EW about his role, what story he wishes he could have been a part of, and what happened to his character after the film’s events. (Hint: The undead are involved.)

ENTERTAINMENT WEEKLY: So, Love Actually. Can you believe it’s been 10 years?
ANDREW LINCOLN: It’s quite shocking that 10 years has passed. Having children — they’re sort of like time warps, they swallow time, so that accounts for half of it. The rest of it? Zombies, obviously. It’s a wonderful thing to be remembered for something that brings so much happiness and also seems to become a go-see movie at Christmastime. It’s a very special thing, but it does seem like a lifetime ago, it’s very strange. But it’s amazing, and I remember vividly when I got the part. It was such a good script. When I read it, I knew in my heart that that was such a beautiful scene at the doorway with Keira. I just thought, “This is marvelous.”

How did you feel about that scene when you read the script?
It sort of sent shivers because I just loved it. It’s always nice, being in a romantic film, but playing the only guy who doesn’t get the girl — not getting the girl in that manner is absolutely beautiful.

Do you remember how shooting went? Was it hard for you to do it without any lines?
It was very sweet and honest. I mean, there’s no acting required, really. I just had Richard Curtis’ brilliant words, which I didn’t even have to say. And then I had to be infatuated with Keira Knightley’s character. It’s not one of the greatest challenges I’ve been posed as an actor.

Earlier in the film, you’re also in an elaborate wedding scene where the band pops up among the pews for a performance of “All You Need Is Love.” What was that like?
I just remember standing next to my dear friend Chiwetel Ejiofor, going “Oh my goodness, what’s going on?” It was so thrilling. I just remember it being beautiful, like so many of Richard’s scenes, that the timing is immaculate in all of it. It was wonderful, it was a fun shoot. It had a very sort of live feeling to the whole thing.

Do you have a favorite story line from the film that’s not your own?
Oh god, they’re all great. There are so many, and they’re all wonderful. I think that’s the strength of the movie, that Richard wrote so many perfect vignettes. It’s actually a movie made of seven short movies. I mean, all of Bill Nighy’s story line is a master class, in my opinion, in comedic timing. I think Hugh does a terrific job playing the, uh, the…

Prime minister?
The prime minister! That’s how long I’ve been in your country. Check that out, I have my American filter still on.  [Laughs] But you know what I love? I love the footage of people arriving at the beginning of the movie. I just think that is such a smart thing. I really still love watching people embracing their loved ones while at the terminal. But I also, I remember the read-through, and I just remember Bill Nighy’s [story line] was just magnificent. I loved the subtitled sequence as well with Colin. I think that’s genius, and I mean, all of them, it’s a Christmas cracker! That’s what we’re talking about. It’s like a box of chocolates, isn’t it? No, that’s a different movie.

Yeah, that’s Forrest Gump. “Life is like a box of chocolates, you never know what you’re gonna get.”
Well, you sort of do in this movie. You’re gonna get very nice, scrumptious, very romantic chocolates. But no, I think Bill’s is probably the story line that I love the most of all.

And if you could switch places with any of the characters, which one would you choose?
I think probably it would be a laugh to play Hugh’s part. I’d love to play the prime minister. Come on, why not?

So 10 years out, where do you think your character, Mark, is today?
Oh, Mark I think moved over to America, became a cop, and then a zombie apocalypse happened. [Laughs]

An alternate universe? Okay, that’s plausible.
There you go. That’s what happened to Mark.

Who would survive?
Strangely, I think Hugh would do rather well. Yeah, I don’t know.

On that note, are you still in touch with the rest of the cast?
I see and speak to Bill Nighy, he’s a dear, dear friend. And Chiwetel Ejiofor. But we met before in a play that Richard Curtis saw, and I’m convinced that probably helped me get the role, him seeing that. Colin Firth I saw in Georgia last year, we went for dinner. The thing is, I’ve been over here for the last five years, so whenever I’m back I try and see if there’s any friends on stage or doing work I can get to. It’s been a while.

Well, I think that about covers it — anything else you want to add?
Uh, Merry Christmas? [Laughs]

It’s a little early for that, don’t you think?
Well, why not? Let’s keep it all year round.

Right, because “Christmas is all around.”
Yeah, that’s it.

So I guess we’ll be calling you again in 10 years for the 20th anniversary.
Oh my God. That’s terrifying.

Sorry!
No, no, that’s how I’m plagued by my job. You get to see this person that you don’t recognize anymore, because you’re 20 years older. [Laughs] It’s hilarious.

Since we were talking about my all time fave movie, Love Actually, in the Emma Thompson posts, here's some more insight from Andrew Lincoln.  EW is going to spotlight a cast member in honor of the movie's 10th anniversary
Tags: actor / actress, film, interview
Subscribe
Previous
← Ctrl ← Alt
Next
Ctrl → Alt →
Previous
← Ctrl ← Alt
Next
Ctrl → Alt →