The "Richest" and "Poorest" Shows on Network TV

The two comedies are at opposite ends of the spectrum in terms of their average viewers’ median incomes. The median “Modern Family” viewer in the 18-49 demographic rake in $81,100 annually, according to Nielsen data. “Bob’s Burgers” watchers in the demo, on the other hand, earn around $48,000 per year. 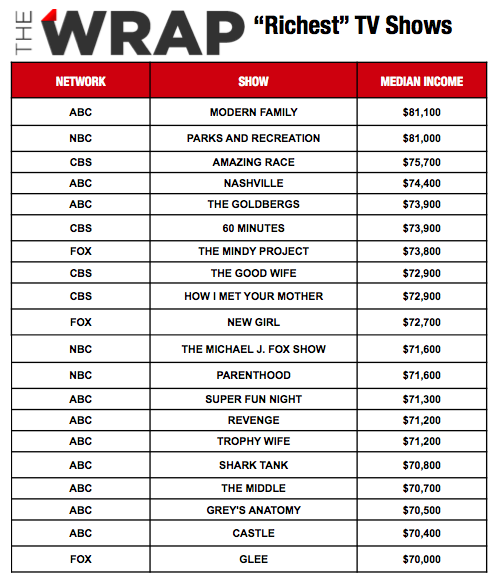 ( see the poor people shows under the cutCollapse )
source

How much money do you make ONTD?

Do you consider yourself rich or poor?
Tagged: modern family (abc), television

thisjoanissima
November 14th, 2013, 12:52 am
I'm a freelance translator so I couldn't tell you how much I make because I don't know. Sometimes I work, sometimes I don't. The pay is never the same at the end of the month. I still live at home and I'm waiting/hoping I can get something more stable in the near future so I can start thinking about moving out.
So...poor I guess.

celestinaketzia
November 14th, 2013, 12:54 am
I'm a USDA grader and a freelance artist, so with both jobs combined it comes to about 40k a year. It's rush season, so I'm working 10 - 12 hour days four to five days a week. I love banking during the holidays.

mattthew
November 14th, 2013, 02:14 am
meh i'm sitting at just under 30k. i don't make enough to live out on my own. i'm due for my review though so hopefully i can get a nice raise. apartments in my area go around 1300-1600 for a 1br... renting a room can be 600 or so. so i'm living at home, pulling my weight cause i aint got no funds for that shit. i make enough to not have debt and be able to afford all of my expenses (insurance, cell phone, most of my food, car payment, etc).

i'm not getting any use out of my degree which is a shame because if i were able to get a job in my field out of college i'd probably be in the 40k range and out on my own which would have been nice.

it sucks, but i'm grateful to have a job and parents that allow me to be at home.

radiant
November 14th, 2013, 03:19 am
I make a pretty good income for where I live + considering the fact that I only have a 2 year degree under my belt. I live with my Mom, so I have extra $$$ to burn and no one to burn it with because pretty much all my friends have debt/kids/responsibility. So... I can front like I have cash but if I was on my own I'd be able to pay my bills and that's it.

Two gay guys who are urban professionals and married = lots of income with no kids.

We have four chihuahuas, though.

But I live in the UK as well, where the prices be sucking you dry. So man still gotta budget even on a high income. Still could be doing better

aprilbegins
November 14th, 2013, 09:54 am
Castle! But I find this hilarious given my unemployment freelance career and the very young Tumblr fanbase that throws off my perspective of who's watching and actually has money

It's pretty obvious the data collection method for this is very flawed. Nevermind the fact that $48,800 is a pretty good income for the average young, sexy single person who watches Bob's Burgers, like me.
←
→