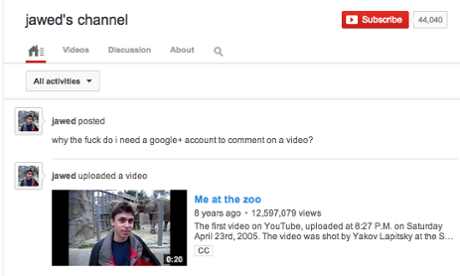 Jawed Karim joins those slamming Google's changes to video site, which enforce use of its Google+ social network.

After clearing his profile of all but the very first video uploaded to the site, YouTube's co-founder Jawed Karim added another comment – fuelling the controversy over Google's changes to its comments system.

On April 23rd 2005, Karim uploaded YouTube's first video, of himself at the zoo. But his profile shows nothing else until the question asked yesterday on his channel:

Google's overhaul of YouTube comments has sparked controversy: the YouTube video announcing the change has nearly 30,000 comments, many including harsh criticism of the move through the medium of ASCII art.

As Karim has noticed, the site now requires a Google+ account to comment. That has clearly angered him. Other commenters have said that they won't use Google+ to comment on YouTube videos – and so will stop commenting.

The company argues that this is necessary to personalise comment sections for each viewer: "You’ll see posts at the top of the list from the video’s creator, popular personalities, engaged discussions about the video, and people in your Google+ Circles," Google explained in a blogpost.

But others suspect that its intention is to artificially boost the apparent number of users of its Google+ social network.

Google+ has been the source of dissent for some users as Google first added a G+ account to every Gmail address, whether or not people wanted it, used it to reward peoples' position in searches, and then made it essential for commenting on Google Play reviews.

However the company has been reluctant to share details about how many people actively use the network for social purposes, with one report suggesting that there were fewer than 10 million daily users in mid-2012. Google has provided less clear "activity" figures – citing 540 million active users who take "some sort" of social action each month, and 300 million "in stream" monthly users. Adding YouTube comments could increase that enormously – perhaps to as much as Facebook's 1.2 billion monthly users.

Karim was working at PayPal in 2005 when he met Chad Hurley and Steve Chen, the other co-founders of the company. But he took a back seat to the growing venture, instead enrolling in Stanford University as a computer science graduate student while acting as an advisor to the site. When YouTube was acquired by Google in 2007, Karin's payoff was worth around $65m.