Sometimes, when two voices come together, the result can be arresting. That's what Holly Laessig and Jess Wolfe discovered when they met at the Berklee College of Music in Boston and struck up the partnership that would become Lucius. The band is a quintet, with Laessig and Wolfe's voices at the center — and the music they make together can sound like anything from 1960's girl groups to sunbaked psychedelia to the hangover that comes after after a heavy-drinking country song. -NPR 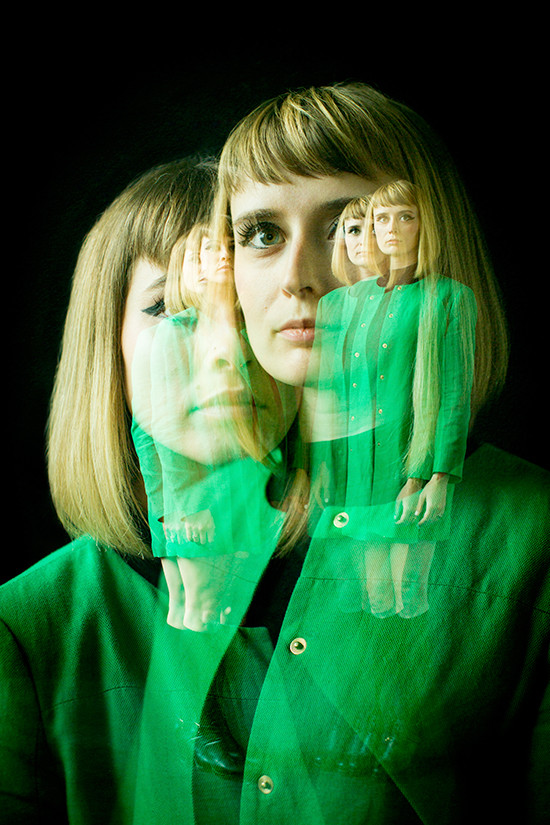 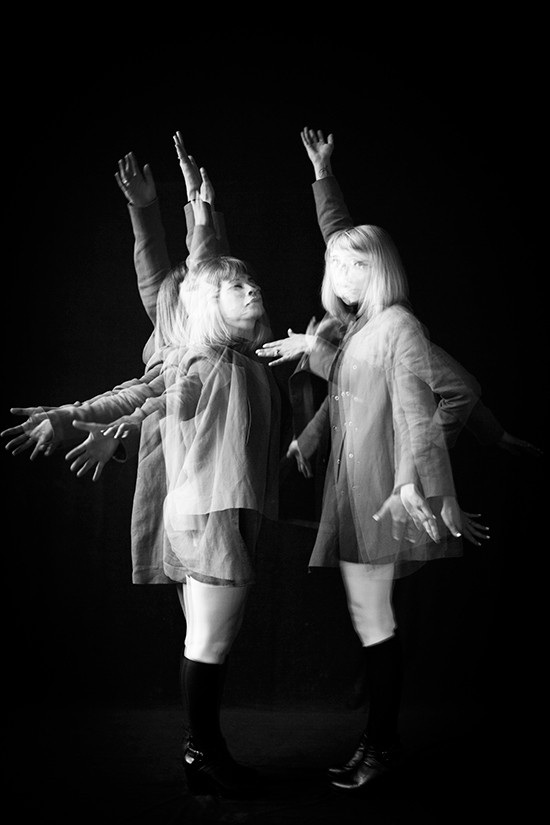 There’s a striking visual component to Lucius, a band fronted by two women who dress in matching stylized outfits and blend their voices so completely it can be difficult to tell who is singing what. It’s fitting, then, that the Brooklyn indie-rockers have accompanied their new song “Tempest” with an evocative conceptual video, which premieres today on Speakeasy.
Directed by Scott Cudmore, the clip pairs off singers Jess Wolfe and Holly Laessig — they’re bound back-to-back in chairs, or sitting opposite each other at a table, or calling out across a windswept beach — while the three men in the band play the song on their respective instruments, watched by unsettling observers who including kids wielding microphones and a Rick Rubin look-alike in sunglasses.
“The video’s perspective is from the dreamer’s desk,” Wolfe and Laessig told Speakeasy in an e-mail. “We were drawn to the theme of duality, since it plays so prominently within our own band. But as carefully crafted as that duality seems, it was really a happy accident. It just happened by chance and it worked.”
“Tempest” is one of 11 songs on Lucius’ new LP, “Wildewoman,” which came out in October. The band is currently on tour in Europe before returning to the U.S. for a brief run of dates in December. -Wall Street Journal 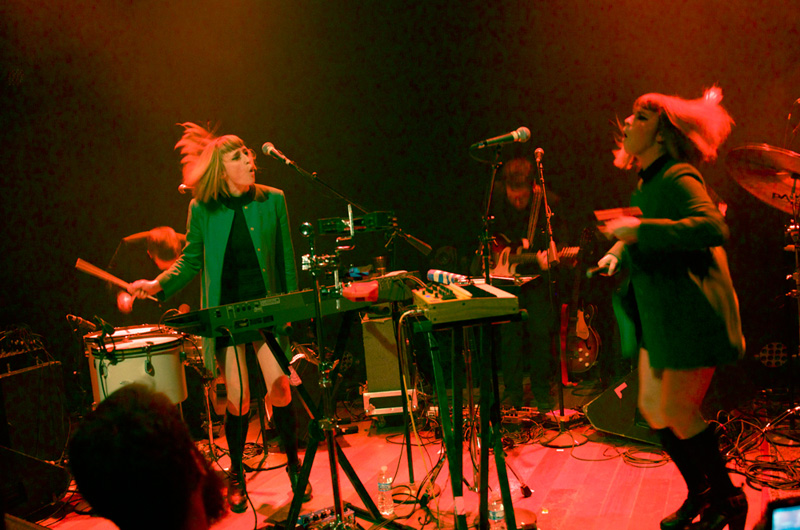 Grubby, mischievous kids having a rollicking good time at the playground. It was a moment watching such innocent miscreants that inspired indie pop quintet Lucius’ album “Wildewoman,” released last week. “It’s an anthem for the wild,” co-lead vocalist Holly Laessig said.
The soulful duo of Laessig and Jess Wolfe lead the Brooklyn-based band. They don’t actually look alike, but when performing, they rock similar updos and outfits to match whatever mod mood they’re in. And there is that influence, a sort of ’60s girl-power vibe that isn’t cheesy or tacky; there’s no vestige of the B-52’s or Josie and the Pussycats here. “Sonically, there’s a lot of symmetry and mirroring,” Laessig said. “This is a kind of visual representation of that.” All Wolfe and Laessig needed to realize that they wanted to make music together was an overlapping friend circle, some red vino, a futon to sit on and a conversation about the Beatles and Cream.
Since that meeting nine years ago while they were at the Berklee College of Music, the central duo have gone through an array of different band lineups before finally finding the right fit two years ago. The fact that Wolfe is married to drummer Dan Molad probably helped facilitate the new cohesion. But Laessig and Wolfe are the heart of Lucius, similar souls who were both rambunctious outsiders, cut from the same cloth as those cherubic children on the playground. Their voices combine to make a harmonious whole — it’s frequently impossible to tell whose voice is whose, or even that two people are singing at the same time.
While the music itself might not be “wild” per se, it does embody the mentality of a non-threatening desire to do whatever you want, or to, as Fleetwood Mac would say, go your own way. Laessig and Wolfe describe the epitome of a “wildewoman” in the album’s title track: “Fearless like Chicago winds in the winter time and her hair is never quite in place and the knees in her jeans have seen better days and she’s no beauty queen but you love her anyway.” (But “Wildewoman” is for all the free-spirited boys and girls.)
Lucius manages to build verdant musical landscapes with catchy, layered minimalism that keeps the hips swaying without overwhelming the ears with wailing guitars, busy synths or double bass riffs.“Jess and I had just moved to New York, we’d broken up with long-term relationships — there was a sense of urgency and hope and anxiousness to get to a good place,” Laessig said. With “Wildewoman,” the duo’s first album with the current band, Lucius has arrived at that good place while still spending time reveling in the trials that brought them there. -MNDaily 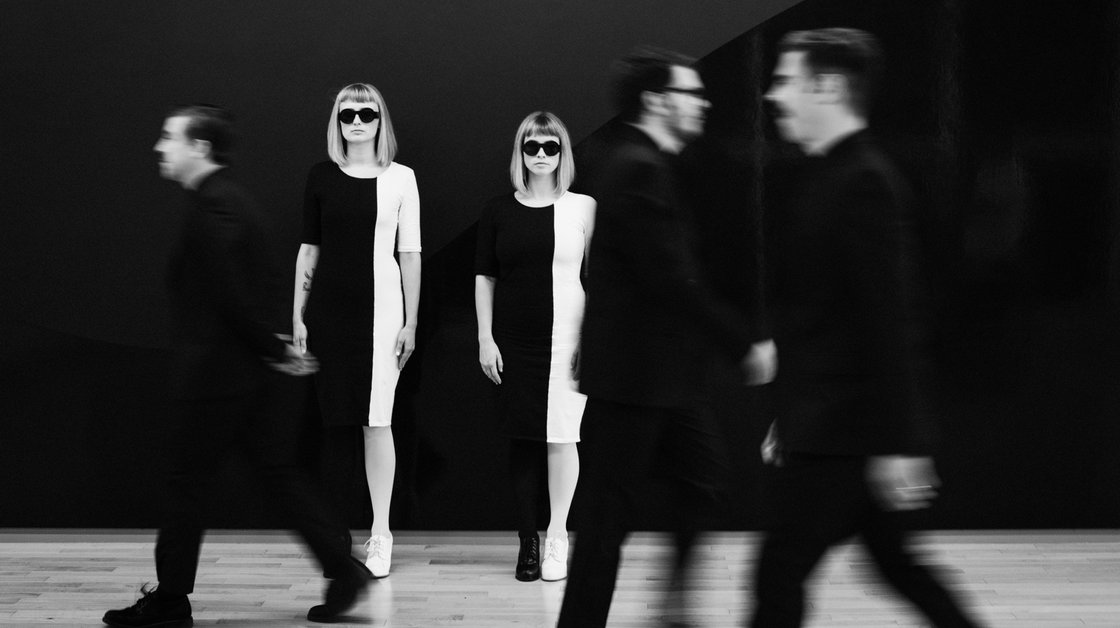