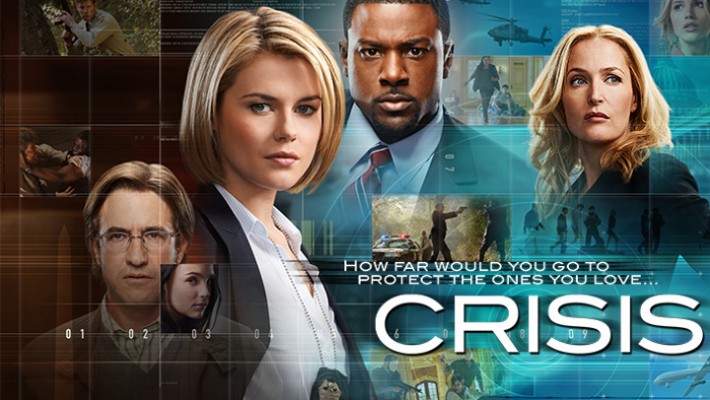 Production on NBC’s midseason hostage drama “Crisis” has gone on an unplanned hiatus to give writers time to tweak storylines and work on scripts, reports Deadline.com.

The break isn’t expected to last long, according to Chicago Film Office Director Rich Moskal.
“All we heard on Friday was that they were temporarily suspending production until the 15th of November,” Moskal said, adding that producers didn’t give a reason for the break. “They were just letting us know they won’t be contacting us for filming out on the streets.”

The series, starring Gillian Anderson and Dermot Mulroney, is a political thriller set in Washington, D.C., but filmed in Chicago, largely at Cinespace Chicago Film Studios on the West Side and on location in the North Shore and the far western suburbs.

A source close to the series who didn’t want to be named said the unplanned hiatus is meant “to give our writers an extended window to plot out and craft the back half of our season. This is not entirely unusual on a complex drama series.”

Officials at NBC and 20th Century Fox Television, which is producing the show, had no official comment.

Deadline reported that insiders claim the break, which comes after filming the sixth episode, is for “course correction.”

“There has been concern recently that subsequent episodes were veering from the direction (and promise) of the pilot, which led to the decision to take a break and try to fix that,” the Deadline post reads.

Filming in Chicago started in late August and is scheduled to continue through late January, Moskal said.
Even though cameras have stopped rolling for the time being on “Crisis,” there’s still plenty of TV filming taking place in Chicago.
USA Network’s upcoming comedy “Sirens” is expected to wrap this week. NBC’s “Chicago Fire” is supposed to continue filming its sophomore season through April and the show’s new spin-off, “Chicago PD,” should finish filming sometime in February, Moskal said.

“It’s field trip day for the students of Ballard High School, a place that educates the children of Washington, D.C.’s elite, top-of-their-industry CEOs, international diplomats, political power players and even the president’s son. But when their bus is ambushed on a secluded rural road, the teenagers and their chaperones are taken, igniting a national crisis. Now with some of the country’s most powerful parents at the mercy of one vengeful mastermind, the question arises: How far would you go and what would you become to ensure your child’s safe return? With so many parents and dignitaries put into play with nowhere to turn and no one to trust, this unthinkable scenario grows from the select families at risk to an entire nation at stake.”