18 Years Ago, Ross and Rachel First Kissed on Friends 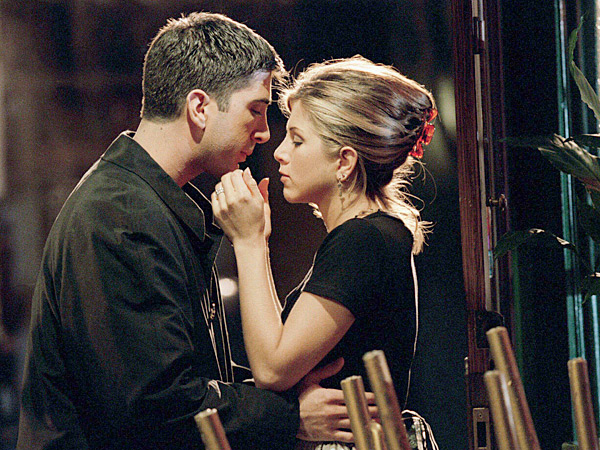 This weekend marks the anniversary of a very special episode of Friends, aptly titled "The One Where Ross Finds Out," which first aired on Nov. 9, 1995.

A little background: When the second season began, Rachel (Jennifer Aniston) showed up at the airport to tell Ross (David Schwimmer) his romantic feelings were requited, but soon discovered he was dating fellow paleontologist Julie.

By this episode, Rachel resolves to move on and lets Monica (Courteney Cox) fix her up. The world's worst date ensues, during which Rachel chugs wine and obsesses over Ross and Julie. An intoxicated Rachel then proceeds to aggressively borrow another diner's giant cellphone (reminder: this was 1995) and leave a humiliating message on Ross's answering machine, proclaiming she's "over him."

In one of the series' most monumental scenes, Rachel then teaches all of us how to do damage control after a drunk dial (well, sort of). When Ross stops by her apartment the next day and asks to check his voicemail, Rachel suddenly has a flashback to the previous night's inebriated phone call. She jumps on Ross in a valiant effort to wrestle away the phone, as he wonders out loud, "When were you under me?" The episode concludes with TV's favorite on-again, off-again couple's famous first kiss.