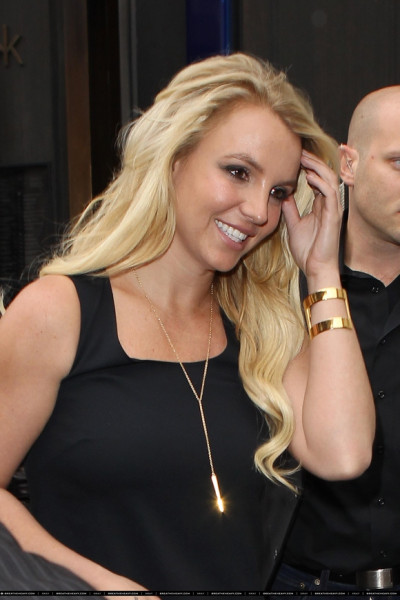 The album features collaborations with will.i.am, Will Orbit and Sia, who co-wrote the much talked about "Perfume" which Britney is about to premiere in the next 2 days.

Sitting down with me, last month, Britney told me that 'she's feeling really proud' about her forthcoming record, which features more of Britney's lyrical input. In fact the star co-wrote most of the tracks on 'Britney Jean." Speaking to me in London, Britney admitted " its been as cool, I was able to take my time out and really focus myself on this album and what I really want to say and don't want to say and how I come across on general.."

The multi-million selling artist also talked to me about her forthcoming Vegas residency at Planet Hollywood ( "I think the fans will be pleased..but it's a nerve-wracking right now") life as a Mom, working with Will.i.am and why she believes Miley Cyrus deserves to win at next weekend's MTV Europe Music Awards.

I've been playing Britney's records on the radio since 1999 but this was the first time I'd sat down and interviewed an artist who's delivered some of the greatest pop singles of the 21st Century. And I'm glad to report that the Britney I met, fourteen years later, was an articulate, warm and generous interviewee who obviously appreciates her British fans and radiates star quality. And she looked amazing too, let's be honest here.

But beyond Vegas and Britney Jean, what's next for the star? "I'd love more kids and I'd love to do more acting. Maybe a movie with James Franco.." Imagine that.

Oh and she promised I could introduce her on stage in Vegas. That's now on record Britney. So thanks!

Listen to my chat with Britney Spears here. With thanks to RCA Records and Edge Publicity.

Listen her interview at the SOURCE