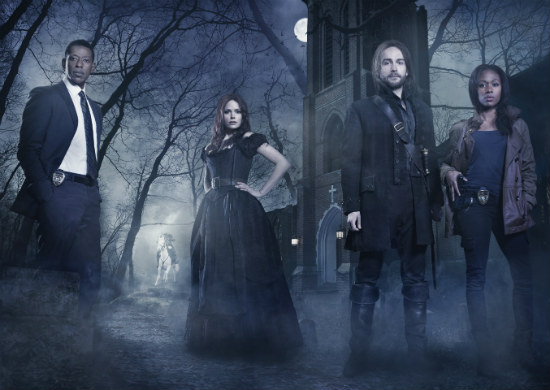 By all means Fox's Sleepy Hollow should not work. It's a nutty show about a Washington Irving character and the apocalypse. But somehow it does. And while it doesn't need you to start watching—it has steady ratings and a second season has already been ordered—you should you. Here's why.

The cast is filled with truly talented actors

Yes, the actors on Sleepy Hollow are very pretty, but they're also really good. Nicole Beharie, who plays Lt. Abbie Mills, is a Juilliard grad who broke out two years ago in Steve McQueen's art-house drama Shame. The show's Ichabod, Tom Mison, cut his teeth doing Shakespeare in the West End. On the light side of things, Orlando Jones, who plays the police captain, is a MADtv vet, though he knows how to play it straight. Of course, credentials alone can't make a good show, but the cast's chemistry and easy rapport make for great viewing. Take last night's episode: the show opened with a humorous bit in which Abbie teaches Ichabod to appreciate baseball (and yelling at umpires) and closed with a touching moment in which Abbie admits she can't lose Ichabod, who has come to believe that he has to sacrifice himself to save the world. The sentimentality of the ending plays well because Beharie and Mison have already sold on their characters' connection. The show would not work if it didn't have the actors willing to sell it, and these guys are completely on board.

While Ichabod is the character that's easy to fall in love with—have you seen Tom Mison?—Abbie grounds the show by defying stereotypes. Beharie has created a character that is tormented without being weak, and fierce without being unfeeling. As Nichole Perkins wrote at BuzzFeed, Abbie therefore defies the stereotype of the "Strong Black Woman:"

In a recent episode, her strength and silence — hallmarks of the SBW — bring a creature of death into her life. She, quite literally, must express her emotions and memories, or die. In order to save herself and her loved ones, Abbie forgoes the stoicism we’ve grown accustomed to. She opens up, and in the process, Abbie sheds the burden of being a Strong Black Woman by expressing her emotional turmoil, freeing herself to fulfill her prophetic destiny.

In addition to breaking free of stereotypes, Beharie holds down the show. If it was all Ichabod, there would be no one to ground the show.

The show's villainy got off to a laughable start in the pilot with an assault rifle-toting Headless Horseman, but as the show has continued, the apocalyptic threats haunting Sleepy Hollow have become seriously scary. They aren't simply monsters-of-the-week coming out of nowhere to assault our heroes. Instead, the week-to-week threats have connections to the town and the inner lives of the characters. In the third episode, the Sandman targets those who betrayed Abbie's sister Jenny, who has been in a mental institution after revealing that she and Abbie saw a demon in the woods when they were little girls. In the fifth, a boy from another era brings a plague into modern day Sleepy Hollow, in a plot from the horseman of pestilence. While the show, on a whole, doesn't take itself that seriously, it takes its evil seriously, meaning there are real stakes out there.

Its funny is organic

Scares aside, the show maintains its sense of humor, much of which comes in a surprisingly understated package. Meaning, it allows for moments like Jones's pitch-perfect delivery of the following line in last night's episode: "You know, there are two things in life I believe a person should hold on to of for as long as possible: virginity and skepticism. Surprisingly I already lost the first thing so I'm going to hold on to the second one for as long as possible." Or the much touted moment in which Ichabod has a genuine conversation with an On Star-like car computer.

It's borrowing from the right sources

Though the show may have cobbled together its mythology from a whole range of places—the Bible, Irving stories, questionable interpretations of American history—it derived a number of other stylistic elements from various TV shows before it. Margaret Lyons at Vulture wrote about the show's predecessors yesterday, noting that Abbie is an obvious descendant of Dana Scully and Olivia Benson, while the show borrows some of American Horror Story's "campy self-awareness." Meanwhile, in an interview with Vulture's Josef Adalian, co-creator Alex Kurtzman said he wanted the show to evoke Twin Peaks. We'd note that the show's commitment to the seriousness of its storyline while still able to to laugh at itself owes something to Buffy the Vampire Slayer, perhaps the quippiest of supernatural shows.

You can waste a ton of time on it

At the show's New York Comic Con panel, we were taken aback by how vocal the fandom was after a mere four weeks, proving how easy it is to get sucked in by this show.  Just go to the Sleepyheads tag on Tumblr to fall down the obsession rabbit hole. (Complete with the ultimate ship: Ichabbie.) Even the cast is getting in on it. Jones, for instance, runs a Tumblr, posting fan art and calling out to Sleepyheads.

[Spoiler (click to open)]Sleepy Hollow Exclusive: Ichabod's Clothes Are Finally Coming Off — But There's a Twist!

Sleepy Hollow is taking Ichabod Crane to the cleaners — literally.

Executive producer Alex Kurtzman tells TVLine exclusively that the character will shed his trademark — and likely odorous — period garb before the end of the season (albeit temporarily).

“Ichabod’s clothes are his security blanket, his tie to the past,” Kurtzman says. “That being said, he will soon discover the joys of dry cleaning and the grave injustice of the bill that accompanies it.”

This will mark the first major scrubbing Ichabod’s duds have received since he was transported 200 years into the future (in Episode 2, he gave them a very light washing).

It’s not clear what Tom Mison’s Bloomingdales-averse alter ego will wear while his duds are being professionally treated, so feel free to let your imaginations run wild in the comments (my guess: tighty whities). And while you’re down there, tackle this divisive question: Do you think Ich should at some point update his wardrobe? Or are you of the opinion that the (circa-1700) clothes make the man?