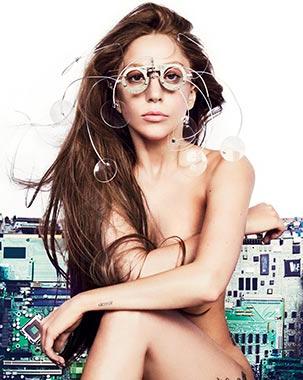 What's a trailblazer to do when her path becomes the road most traveled? Back in 2008, The Fame introduced us to Lady Gaga as a wickedly funny pop parodist and crack songwriter with a fresh take on celebrity — one that involved brazen publicity stunts, surreal costumes, and daily look-changing (plus the occasional beef blouse).

Five years later, outrageous is the new ordinary and instant reinvention is the status quo. (What Madonna was to Gaga, Gaga is to Miley, or at least to Miley's half-drunk teddy bears.) Which lately seems like a burden for Gaga herself, who's been flitting through disposable personae — there are no fewer than nine in the video for ARTPOP's lead single, ''Applause'' — without finding any that stick. The irony of her latest album is that while Gaga is shape-shifting faster than ever, her music hasn't evolved much.

With their Hollywood-gothic imagery and rousing beats, most of the songs here would fit right in on The Fame or Born This Way. They hit enjoyable but well-worn sonic marks, from the synth-swaddled choruses of ''Aura'' and ''Sexxx Dreams'' to the barroom ivory-tickling of ''Gypsy.'' And they deal in tropes and metaphors that have become standbys in Gaga's canon: Love is a drug (''Dope''), artifice is truth (''Fashion!''), and fame is a religion in which shamelessness is next to godliness (''Applause''). Retro may be white-hot right now (see: Miley, Bruno, Daft Punk, et al.), but ARTPOP doesn't reach back far enough. In music, as in fashion, there's a critical gap between vintage and last season.

Familiarity isn't necessarily bad, though. As always, Gaga is a whiz at strong melodic lines, like the swooping hook on ''Gypsy.'' She's a clever comic who's delightfully willing to be the butt of her own jokes. (''I know that Mom and Dad think I'm a mess/But it's all right because I am rich as piss,'' she cracks on the pot ode ''Mary Jane Holland.'') As pop, the album is a well-executed and entertaining tour of Gaga's tried-and-true tricks. But as art, it falls short when it comes to one basic function: making an impression. B