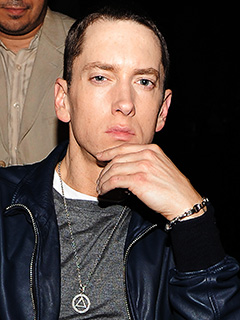 Eminem’s new album The Marshall Mathers LP 2 comes out tomorrow, and in the lead-up to its release, there have essentially been two conversations happening. The first is obvious: Is MMLP2 any good? (EW’s Nick Catucci is conflicted.) But the second is a bit more complicated: In 2013, what’s the deal with Eminem still using gay slurs, especially on the single “Rap God”?

In that song, Eminem takes down rivals with the lines “Little gay-looking boy / So gay I can barely say it with a straight face-looking boy” and “You f–s think it’s all a game ’til I walk a flock of flames.” Those lines have both widespread controversy and confusion, considering Slim Shady has constantly had to walk back his stance on homosexuals.

He attempted to clear everything up in the pages of Rolling Stone this week: “I don’t know how to say this without saying it how I’ve said it a million times,” he told the magazine. “But that word, those kind of words, when I came up battle-rappin’ or whatever, I never really equated those words . . .”

At that point, the writer helps him along. “To mean homosexual?” he asks.

Mathers continues. “Yeah. It was more like calling someone a bitch or a punk or a–hole. So that word was just thrown around so freely back then. It goes back to that battle, back and forth in my head, of wanting to feel free to say what I want to say, and then [worrying about] what may or may not affect people. And, not saying it’s wrong or it’s right, but at this point in my career—man, I say so much s— that’s tongue-in-cheek. I poke fun at other people, myself. But the real me sitting here right now talking to you has no issues with gay, straight, transgender, at all. I’m glad we live in a time where it’s really starting to feel like people can live their lives and express themselves. And I don’t know how else to say this, I still look at myself the same way that I did when I was battling and broke.”

When asked whether or not those words came out of his notorious Slim Shady persona, Em said, “I’ve been doing this s— for, what, 14 years now? And I think people know my personal stance on things and the personas that I create in my music. And if someone doesn’t understand that by now, I don’t think there’s anything I can do to change their mind about it.”