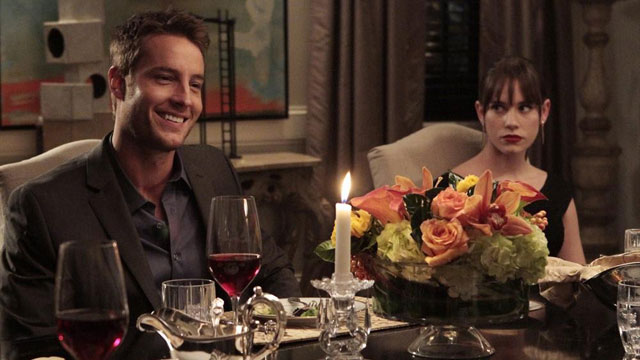 While Revenge isn't home to many truly tender relationships (save for Jack and Sammy), last week's excellent episode opened the door for Nolan to potentially find his happy ending in the most unlikely person: Patrick, Victoria's long-lost son! Yes, the two sealed their flirtmance with a kiss -- and maybe more -- leaving fans desperate to know what's next for Nolan and Patrick (who shall be known as "Nolick" from this point forward).

Justin Hartley, whose innate sincerity makes Patrick all the more beguiling, recently spoke with ETonline about this delicious development for his character, what fans can expect in the coming weeks and the surprising realization he came to through playing this character.

ETonline: For a while it seemed like Nolan's gaydar was off, but then Patrick went in for the kill last week. Did you know from the beginning that Patrick was going to be gay?

Justin Hartley: I got a breakdown for this character and thought he was interesting, so I auditioned. Then, I think it was the next day, they brought me back to read again and the sides were different and it was evident that he was gay. I didn't care if he was gay as long as it didn't change the things I found to be interesting about the character, which was his mystery and levity -- and, if anything, being gay made him more interesting to me because any time a character is given elements that make him different from the people that surround him, it enhances their story. So everything about the role was enticing to me and I've had a blast playing it so far in every regard. It's a great show, a great character, and on a selfish note, I love being able to play something I've never played before!

ETonline: Can you talk about how you and Gabriel Mann approached the big kiss; what was important to you both about that moment?
Hartley: Well, it was important to both of us that you feel their connection first -- we wanted it to look like these two had something deeper going on and that this isn't just another cookie-cutter relationship. So the moment when Patrick opens up to Nolan at the beach club, which was beautifully written, was the first step. Then the kiss was a major moment, not just for the audience but the characters. It's so huge for Patrick to let someone in like that, and that's true for Nolan as well. He may be this playboy who takes home good-looking guys and girls, but that doesn't mean he's invested in them. So we talked with the writers about the idea of this pullback before the embrace. It was important to me that if Nolan was going to move in and Patrick was going to think things were moving too fast, that Nolan's reaction to that would be the thing that made Patrick initiate the kiss. That's the beginning of a love story if I've ever heard one!

ETonline: So does this become a full-fledged relationship or the exploration of a possible relationship?
Hartley: I think both. It's the exploration of seeing what these feelings mean in a true way. Patrick's saying, "I'm going to let you in, you're going to let me in, we're going to see where this goes and I'm going to trust you until I can't trust you anymore." So we see where it goes. They're both hopeful, they're intrigued with one another, there's chemistry and fire and passion, but also an understanding that they're both damaged goods. For someone to say, "This is me, and I would like you to let me in," and the other person to reply with, "I would love that," there's nothing better.

ETonline: On the subject of fire and passion, how intimate does it get?
Hartley: There's more kissing ... I think. Not that Gabriel is a bad kisser and I'm forgetting; he's a great kisser [laughs]. I think everyone will like where it does.

ETonline: What have you learned about Patrick through his relationship with Nolan?
Hartley: It's funny, when I got this part, I thought it was great because, on a totally selfish level, Patrick was nothing like me. Even on Smallville, with The Green Arrow, I could relate to that guy. Any father can relate to feeling like a superhero when you put a Band-Aid on your kid. And we all go through the stages of feeling like a playboy and thinking you're cooler than you are. But Patrick was nothing like me. Now, several months in, I'm amazed at how much he's like me! He's a little guarded, he's got a dangerous streak to him, he can go off-the-rails and overstep -- I mean, I hope I'd never try to kill someone, but I know how it feels to go too far when you have strong convictions. One of the things I did realize about the character is how similar we are in the way we go about life. He's not afraid to take chances; he's not a grifter, but he likes to travel, likes culture, he's intrigued by other people, he's smart ... what else can I say about myself that's really cool? [laughs] I just found a lot of similarities between the two of us.

ETonline: You hesitate to call him a grifter, so how would you describe Patrick's relationship with Victoria?
Hartley: Madeleine [Stowe] and I have talked in-depth about this; we both have kids and the list of things you wouldn't do for your child is incredibly short. One of the things that's interesting about Victoria and Patrick is she gave him away as a baby, so she's only known him as a grown man. She didn't raise him, so if they're similar in any way, it's chemical. Unlike Daniel and Charlotte, Patrick wasn't taught by Victoria to be a certain way. But Patrick's agenda changed once he got to know Victoria and see the pain Conrad was inflicting on her; he's crushing this woman's soul and by seeing that, Patrick actually grows to love his mother in a meaningful way. The things he does after coming to The Hamptons, getting to know her and walking near her shoes for several months forces him to do some things that are a little off-the-rails crazy.

ETonline: Interestingly, the closer he gets to Victoria, the bigger a target he becomes in Emily's eyes.
Hartley: Emily is going to get what she wants however she can, and the unintended consequences of that might make Patrick collateral damage. I don't think Patrick sees the eminent threat Emily poses because he's so invested in his mom; he's taken his eye off the ball a bit when it comes to Emily and we'll see if she crushes him or not as a result.

ETonline: Looking ahead, what are you excited for the audience to see in the coming weeks?
Hartley: The audience has taken a liking to Nolan so to see him legitimately invested in a relationship that could unravel his entire life will be interesting to see play out. Also, Victoria isn't the closest of friends with Emily and Nolan, so we'll see what happens when Victoria, who has opened up to Patrick, sees Patrick with Nolan. That could ruin her life or give the enemy ammunition in her eyes, so we'll see Victoria react to that -- will she abandon him again? It's a big question. The waters are still right now but a jet ski is coming through and about to cause some major waves.

He's sounds like such a cool guy! I love Nolan and Patrick together, can't wait to see how this relationship progresses!