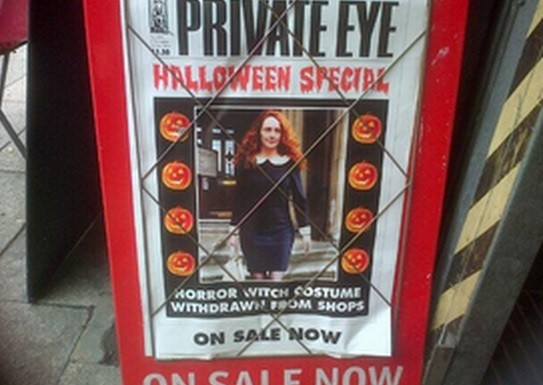 Copies of Private Eye have been taken down from a newsagent's shelves near the court building where former News International boss Rebekah Brooks and seven co-defendants are on trial on charges related to an alleged phone hacking plot, it has been claimed.

Two Metropolitan Police officers in plain clothes reportedly removed from public view the latest issue of the satirical magazine, which is on sale near the Old Bailey in London.

In court, potential jurors for the trial of Brooks and others were questioned on whether they had seen the front page of the latest issue.

According to order-order.com, vendors were told not to sell the magazine by police "on behalf of the Crown Prosecution Service".

Across the road at the Old Bailey potential jurors were asked if they were readers of Private Eye or Guido Fawkes during the selection process. If they answered affirmatively they were excused from jury service.

A police source told IBTimes UK: "It all stems from the court case and their front page."

The offending content was the magazine's front page, which contained a subhead reading "Horror witch costume withdrawn from shops" beneath a picture of Brooks.

The former editor of the Sun and the News of the World and chief executive of News International has denied conspiracy to hack telecommunications, conspiracy to conduct misconduct in public office and of perverting the course of justice.

On trial with her is David Cameron's former spin doctor, Andy Coulson, Brooks's husband Charlie Brooks and five others.

A source at Private Eye said: "We don't have any comment."

Fair enough measure in order to avoid prejudicing the outcome of a trial? Horrid censorship?
Inconsequential, if a little misogynistic?

She is not actually on trial for being a witch. Obviously.