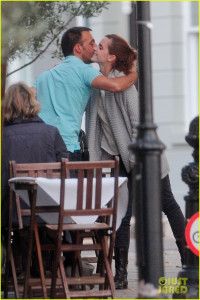 Emma Watson goes in for the hug with a mystery man while grabbing dinner together on Friday (October 25) in London, England.

The 23-year-old actress is back in the UK after spending some time in Los Angeles over the past week. She was spotted at the airport on Wednesday catching a flight out of town.

Emma‘s upcoming movie Noah has recently been in the news after it was reported the film got an unfavorable reaction from both Christian and Jewish audiences in test screenings, but director Darren Aronofsky‘s rep calls the reports “false rumors and gossip,” according to EW.


FYI JJ: That "Mystery Man" is Alejandro Amenabar, who directed Nicole Kidman in The Others and Rachel Weisz in Agora, among others.

Tbh im excited, i usually like Alejandro's movies and i really like Emma (though she may not be the best actress ever...) so im interested to see what comes out of this meeting (if anything at all).