Mark and Iveta cha cha to MC Hammer, and it's amazing.


Erin leaves to have baby

Erin and Colin Jackson dance the quickstep (they wuz robbed)

When Strictly favourite Erin Boag announced she would not be taking part this year, she said only that she wanted to focus on new challenges.

But today we can reveal the real reason for her departure – she is pregnant.

Erin, 38 – who is expecting her first child with business exec hubby Peter O’Dowd, 46, in the spring – said: “I can’t keep it covered up any longer.

“There’s been much speculation about my absence from this year’s Strictly Come Dancing, but I can now reveal the real reason why I turned it down. Yes, I’m truly excited and delighted to say I’m pregnant.

“It’s such a relief to be able to tell all as it’s been strictly mum’s the word these past few months.”

She said another reason she has kept so quiet is that she has been suffering terrible morning sickness. “I don’t know why it’s called morning sickness as I’ve had it morning, noon and night,” she said.

When Erin quit in the summer, she was one of only three dancers to have appeared in all 10 series of the BBC show since it started in 2002.

She was crowned winner of Strictly Come Dancing back in 2010, where she also met the love of her life, Artem Chigvintsev. 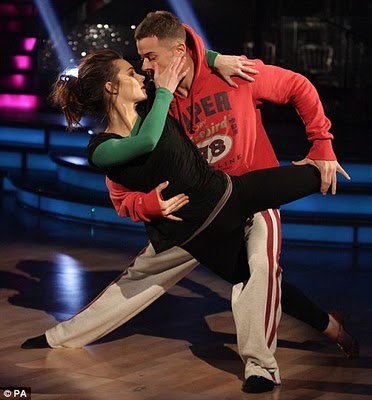 And now Kara Tointon has opened up about her boyfriend's 'intense' regime as he gets stuck into the new series... while she's busy promoting her new film The Last Passenger.

The former EastEnders star told omg! exclusively that the dancing show is so crazy that it completely 'takes over' and that she's yet to meet Artem's new partner Natalie Gumede.

She told us: ''Artem is busy, busy ,busy. It's non-stop - that show just takes over and it's crazy. Because I've been there and done that I understand what it's all like.''

Kara added: ''It's so exciting but now I love watching it as a fan with my tea at home. It's literally the most nerve-wracking thing you'll ever do and my heart is with them. It's just a one off experience. It can get a bit intense.''

With at least one couple finding love each year on the show, we'd have thought that Kara would have been keeping a watchful eye over Artem and his gorgeous partner - but it seems that they're yet to meet.

She told us: ''I haven't met her yet but I'm wishing her all the luck in the world. She looks pretty damn good I think.''

Artem and Natalie quickstep. To Usher.