With the game dropping next week, here is a round-up of recent news. 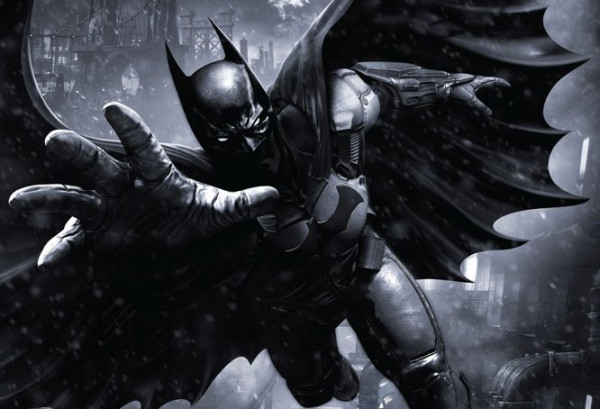 source
2 Week Delay for 3DS, Wii U and PC in the UK

Originally scheduled for release next week in Europe, Warner Bros. told CVG that Batman: Arkham Origins for the Nintendo 3DS, Wii U and PC (retail copy) will be delayed for another two weeks.

Batman fans who are looking forward to get Arkham Origins for the said platforms above will have to wait for two weeks as they will be released on November 8th, instead of the original release date of October 25th. Warner Bros. didn’t specify a reason to CVG as to why those versions of the game are delayed.

Luckily, the delay only applies to the UK and not to North America.

Did you examine the score for Arkham City and Arkham Asylum before starting?

I played the previous games, but my main first question was one of continuity. This is a prequel Batman who's a lot younger. He makes more mistakes. He's a bit more pissed off. We wanted the music to represent that. When you're a composer for Batman there's kind of a dress code. It has a certain sound to it. Whatever I do there's a DNA to Batman music. But because it's a prequel, I had a little more freedom. The previous soundtrack had a much more elegant, traditional orchestral score. For Origins, I wanted it to be more electronic.

Arkham Origins definitely has some Hans Zimmer-style BWAAAAAANH. Is that something we should just expect from dramatic movie and video game scores?

Hanz is a genius at what he does. It works in so many places because it's the kind of music that doesn't draw conclusions. That Batman material, you could put that into anything! You can put that in a dog food commercial and it would be epic. It doesn't draw conclusions. But as brilliant as Hanz is, there's an overuse of that style, because from a technical standpoint, it's very easy. It just works. It's a modern sound. That's just what's happening. You have to have a director willing to take a risk or do something new. Like The Social Network for Trent Reznor. It was so different sounding – it's new, it's not an orchestra. But it all evolves until it burns out and something new takes its place or something old comes around again.

Technically speaking, how is the music integrated into the game?

Most of it is in cinematics, and that's traditional scoring like I would do in a movie. But then there's the actual in-game music, and that's really fascinating. Let's say Batman is walking into Blackgate. . . the music is done in layers. One layer is the moody layer of walking in to the prison, but then Batman is being stealthy, so there's another layer that gets activated – what we call a tactical layer – and that might sound like synth pulse to give it some excitement. Then, if you're in a fight, there's a third fight layer that gets added. The fourth layer is an all-out combat layer with drums and orchestra. Every layer can all be subtracted or added.

Do you get to see the gameplay before starting the score?

I'm based in Burbank and the game team is in Montreal. We have a computer program where I watch a video in real time over the phone with the director and we have a conversation. Is this a scary scene? A dramatic scene? For the in-game, that gets interesting, because music is all about the timing – I know a scene is two minutes. The music needs to address that time. But with the gameplay, a guy who sucks could take an hour. Someone else could blast through it in 15 minutes. So you don't want the music to be tedious. It has to be Batman music it has to be exciting.

Speaking to Eurogamer, producer Guillaume Voghel revealed more about the one life and no saves I Am the Knight difficulty, which opens up after players complete the game and then its New Game Plus mode.

"The main narrative arc and side missions last about 12 hours," he said, "and then you have all the collectibles. To get 100 per cent of that will take much, much longer. We have a new difficulty level, New Game Plus is coming back--that's really difficult--and when you're done with that there's I Am The Night mode--which is no saves and one life."

Voghel also confirmed that the game's Initiation DLC will offer a single-player campaign set in Asia, with Bruce Wayne training to become Batman.

"You play as Bruce Wayne learning to be a ninja," said Voghel. "That's a really cool one. Narratively there's some added content that will give players a little more background story."

Initiation will be included in Batman: Arkham Origins' $19.99 season pass, along with four other pieces of downloadable content. Three DLC packs have been confirmed as skins, with the last pack yet to be confirmed. The game will also feature Knightfall DLC exclusive to the PlayStation 3.

Part of the Initiation DLC will feature Batman proving himself to his teacher, Kirigi, who also trained Ra's al Ghul's League of Assassins.

"[But] it's not League of Assassins, it's ninja-related," Voghel added. "It's when he learned to be a ninja and learned those techniques. He goes to a monastery--custom content was created for the DLC. You'll be in Asia in the monastery. The team did a great job on that, it looks really good."

Batman: Arkham Origins will be released for Xbox 360, PlayStation 3, PC, and Wii U on October 25.

While we're just a few days away from the release of Batman: Arkham Origins, last night's GT.TV brought fresh insight into how the game's Case File System will help the player unearth significant story details throughout the campaign.

On the most recent edition of GT.TV, Batman: Arkham Origins' Creative Director Eric Holmes set the stage for the relevance of the game's Case Files System by explaining how it plays into the plot while helping to advance the overall story. By now you know that Origins takes place at about year two of Batman's career – a time when the Dark Knight is fighting organized crime such as the mob and street criminals, but also at a point where he's had the advantage of being the most trained and equipped combatant on the streets of Gotham. That is until a huge bounty is placed on his head by Blackmask, which brings eight of the city's greatest assassins out to destroy the Dark Knight. Inspired by Rocksteady's Detective Vision that was featured in previous Arkham games, the Case Files System allows Batman to cultivate evidence and see what enemies have been up to while playing up the concept of Batman being the world's greatest detective.

As you may or may not have heard already, players will randomly encounter these Case Files or respond to 911 calls leading to them as they utilize the detective vision to reconstruct crime scenes that have taken place in the game world, allowing the player to see the whole crime scene play out from back to front as the evidence unfolds. All of this in an effort to decipher who Batman should bring to justice.

Holmes stated that the system will unearth some "very significant story events" that will serve as revelations for the player embarking on the origins of Batman, so those of you looking to get as much back story as possible will probably want to see these Case Files through.

So, check out the interview within the latest episode of GT.TV (it begins at about the 13:00 minute mark) and then let us know how the combat, characters and Case Files System of Batman: Arkham Origins are adding up to impact your interest level in the game.

Can't wait, I've been playing Arkham City to hold me over. I'm especially excited for the HBIC Lady Shiva!