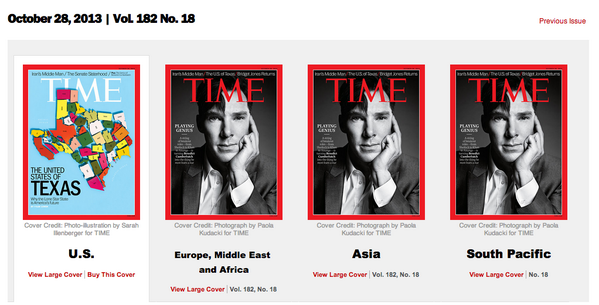 You can’t always get what you want. Especially if what you want is a copy of a magazine featuring your favorite dreamy movie star on the cover.

It’s a lesson we here at TIME learned today after we put actor Benedict Cumberbatch, also known as the owner of the sharpest cheekbones in the land, on the cover of the International edition of TIME Magazine (U.S. subscribers, he’s in the magazine as well!). Some fans were upset—maybe spitting mad is the more accurate term—that the Cumberbatch cover is only available outside of the U.S. Others were just happy that their object of Internet affection is getting some face time within the red border. And let’s not forget this swoonworthy GIF we made for you.

Below, some of our favorite reactions.

@bryanrwalsh @TIME I was going to buy it on my way home. Just not fair. I know he's not a household name here yet but he will be.

As soon as I unfollow @TIME they do this: Something in the way he moves http://t.co/jOW95j3TdA http://t.co/Tel0Kw4hUF AAAND back I go.

I'M NOT CRYING IT'S JUST BENEDICT CUMBERBATCH ON THE COVER OF FLIPPIN TIME MAGAZINE IN MY EYE.

WHY DO YOU HATE AMERICA, @TIME MAGAZINE?!? pic.twitter.com/Fg5ZDtWR05

@TIME This is the cover everyone gets EXCEPT the US? Y'all really suck.

darnit, i'm trying not to, but i can't help but swoon RT @TIME: Something in the way he moves| http://t.co/rNcaqPU9t1 http://t.co/AnL2S3eh4f


Ideas for the next TIME cover? Someone from Doctor Who, perhaps?