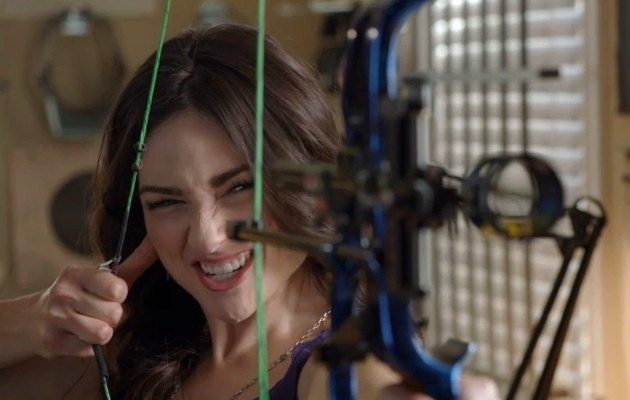 So far in our “Teen Wolf” series, we’ve talked about the show’s atrocious treatment of women and people of color, the writers continuously abusing Isaac Lahey, and the lack of consequences for the show’s abusers. In our last post, we continued our discussion of abusewith a look at Gerard and Kate Argent; then, we looked at Chris and Victoria Argent.


This week, we will focus on Allison Argent, a character whose initial role as a love interest for protagonist Scott McCall has been much expanded. Allison has a complex and twisted family history, deeply entrenched emotional issues, and a propensity for violence that appears to be genetic, but also appears to come from a desire to be as strong as possible.


Allison Argent comes from a long line of werewolf hunters. She can trace her lineage all the way back to the legend of the Beast of Gévaudan in 18th century France, and is the youngest woman in a family that claims to favor its women as leaders. But Allison has no idea of her lineage until, suddenly, she is dating a werewolf that her father is hellbent on killing. Her aunt, Kate Argent, tells Allison about the Beast and plants easter eggs for Allison to find — letting her niece overhear conversations, find weapons, and more. When Kate captures Derek Hale and tortures him for information, Allison finds out about the existence of werewolves. She also finds out about her family’s role in the “war” between humans and werewolves, and starts training to carry on the family name.

The reveal of the Argents as werewolf hunters isn’t surprising — “argent” means “silver” in French, and silver is deadly poison to lycanthropes. Plus, star-crossed lovers are definitely not a new plot device. The tension of “will they be together even though they can’t???” is a classic. But in this case, Allison’s involvement with Scott actually becomes incredibly dangerous for both of them, as well as the people around them. Scott and Allison are designed to be the supernatural Romeo and Juliet. They fall in love, break up, fall in love, and break up — it’s a pattern that’s familiar to couples in teen dramas, but aggravated by the violence perpetrated between werewolves and hunters.

Allison’s character development is slow-moving. For the majority of season one and even moving into season two, she is incredibly one-dimensional as Scott’s love interest. But the more heavily involved she gets in “the family business”, the more her purpose is revealed. Allison has spent much of her life equating emotions with frailty — a connection that undoubtedly stems from the environment in which she was raised. Victoria and Chris, who are no-nonsense even in the most emotional of times, have conditioned Allison to believe that in order to be strong, she must mask how she feels. We learn in “Party Guessed”, a season two episode where all of the characters’ deepest fears are revealed, that Allison’s greatest cause for anxiety is not the constant conflict between her family and her friends, between the so-called monsters and the good guys; it’s not even the continual danger she finds herself in. No. Allison’s greatest fear is that she is weak, that she is a liability, a disadvantage to the winning team, whatever team that may be.


This is when Allison’s character arc begins to really develop. This is where we see Gerard Argent come into play, as well as Kate. Allison is shown how to follow the Code, how to strategize and, most importantly, how to hunt. (How to kill.) And it must have been enticing, to gain all of this new knowledge and feel genuinely powerful, maybe for the first time in her life – to be surrounded by people with take-no-prisoners attitudes and the means to reinforce that belief. Throughout season two, Allison falls deeper and deeper into the pit her grandfather has dug for her, especially until she’s a shadow of who she used to be, but she doesn’t hit the very bottom until the death of her mother.


Victoria’s death is Allison’s breaking point. Gerard hands Allison her mother’s letter — a letter that, no doubt, was in and of itself a lie Gerard had used to further his own plot, since there was no indication or mention of Victoria ever writing Allison a letter. He hands it over, and cloaks his artificial sympathy in words of vengeance and anger and the moment Allison reads is the moment when she lets go of all her supposed weaknesses. We get a montage of her transformation; she rips down photos and letters, tears apart the things that define her, that make her happy, bathes herself in black clothing and prepares herself for a fight.


This is a young girl who is never given the chance to mourn the loss of her mother before she is thrown into her family’s affairs, and into the role of leader. (Though we know, of course, that the women of the Argent family aren’t actually the leaders at all.) And Allison, buried in grief and blinded by hate for Derek — since, at this point, she still doesn’t know that Victoria tried to kill Scott – takes to her new position as easily as Gerard ever hoped she would. In fact, the very bastardization of her character essentially turns her into her Aunt Kate — another female Argent manipulated by the men in her life who are supposed to teach, but instead corrupt.

But it’s important not to write off all of Allison’s decisions as being solely the responsibility of the men in her life. While it is true that she is manipulated into acting out — violently — against Derek and his pack, believing him to have attacked her mother unprovoked, Allison still has autonomy in her decisions. She has control over her actions and must face consequences for nearly killing Boyd, Erica and Isaac (more than once, in the latter’s case). But Jeff Davis and the other writers on “Teen Wolf” don’t seem to think that’s necessary.

At the end of the season two finale, when Allison breaks up with Scott — because even then, even after she tries to kill Derek and his betas and the true levels of Gerard’s treachery are revealed, it’s still all about the love story — he tells her that she has nothing for which she needs to apologize. That’s not true. She does need to apologize and while she needs to mourn her mother, she also needs to own her choices.

In her attempt to become a strong, matriarchal leader, the way her family expects, she fails to realize that her humanity — her weaknesses — are what make her stronger than the rest of her family put together. Allison’s transformation into a cold-hearted killer is disturbing to watch, because her ability to love and feel compassion and be a good person are thwarted by her desire for revenge. And it’s not until halfway through season three that we see her start to realize that and take hold of it, using her humanity and her strength as a hunter to pull her father out of “retirement” and create a new Code for the Argents that makes far more sense — to protect those who can’t protect themselves.

The cycle of abuse isn’t broken, though. Allison is manipulated by Gerard into performing like his little hunter puppet (and used as a bargaining chip in his battle of wills with Scott, which is all kinds of messed up — he sees his granddaughter solely as a weapon and an object and has no qualms about using her however he sees fit). It’s the same fate her aunt Kate suffered, and Kate died for her troubles. Allison is still very much alive, and after she returns from a long vacation away from the supernatural with her father, it becomes increasingly apparent that though she is trying to balance being a human being with being a hunter, there are some things that cannot be forgotten.

One of those things is her treatment of Isaac Lahey. She tried to kill him — twice — and Isaac has expressed discomfort around her more than once. So the obvious solution to this tension, in the land of “Teen Wolf”, is to put them together romantically and use that relationship as a means of putting Scott through emotional turmoil. Not only are Davis and company putting an abused character (Isaac) into a relationship with one of the people who’s hurt him, they are also still using Allison as a plot device to further the protagonist’s story. (This is especially annoying, given that Davis has said repeatedly that he doesn’t want to play these three off as a love triangle. Ha.) Even three seasons later, after everything she has gone through, Allison is just a love interest. She is reduced to being either a marionette, manipulated by the men in her family, or an ingenue, leading boys astray.


At the end of the day, Allison Argent has a lot to apologize for — she has a lot of consequences to face and lessons to learn. But that doesn’t necessarily mean that she needs a redemption arc. No one in her family has ever expressed a desire to exist outside of the life of a hunter. But Allison has, and that fact might very well change everything — for herself, for the Argents, and for the world of “Teen Wolf” as a whole.

Source
The first two articles, which focus on Gerard/Kate, and Chris/Victoria

I know that there's a large amount of debate within the fandom as to how much Allison was responsible for her actions in season 2 and how much she was in need of a redemption arc in 3A, so I think this article is interesting. That being said, there are a bunch of things in it that I disagree with.
Tags: teen wolf (mtv), television, television - mtv
Subscribe