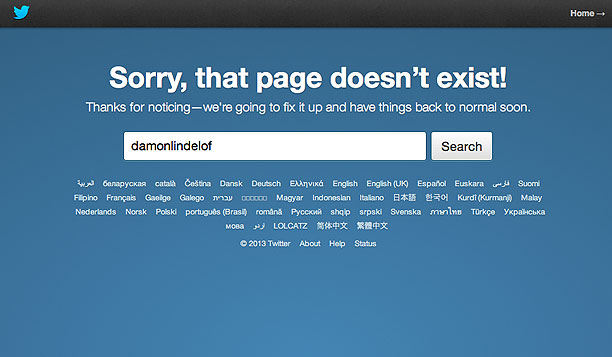 One day after Damon Lindelof released a cryptic, purposefully unfinished tweet — “After much thought and deliberation, I’ve decided t” — it seems that the Lost creator has decided to bow out of Twitter entirely.

It’s possible that Lindelof is simply on sabbatical; before his account disappeared, Lindelof had changed his Twitter bio to read “On hiatus until the government shutdown ends.” Then again, given the amount of abuse heaped on the writer/producer via Twitter in the last few weeks — on the eve of Breaking Bad‘s finale, for instance, he was met with a barrage of messages from folks who are still angry about the way Lost ended — it’s also likely that this break could be a bit more permanent. There’s also this:

I emailed Damon Lindelof to ask about his quitting Twitter; he doesn't want to discuss it. RIP, @DamonLindelof

Lindelof’s reps haven’t yet responded to EW’s request for comment.

If the Star Trek Into Darkness writer really has been chased off the service for good, it’s a real shame; Lindelof’s Twitter account was consistently entertaining, whether he was crowing about Justin Bieber’s ridiculous hat or joyfully livetweeting Sharknado. Then again, you can hardly blame the guy for wanting to step away from an environment that’s often been toxic to him — as Seth Grahame-Smith told EW in a joint interview with Lindelof at Comic-Con 2012, “It’s amazing to wake up and read a tweet that says, ‘Please kill yourself.’” (The two were appearing together on a panel called “The Art of Being Despised.”

Oh, and in case you were wondering — Carlton Cuse is still around!