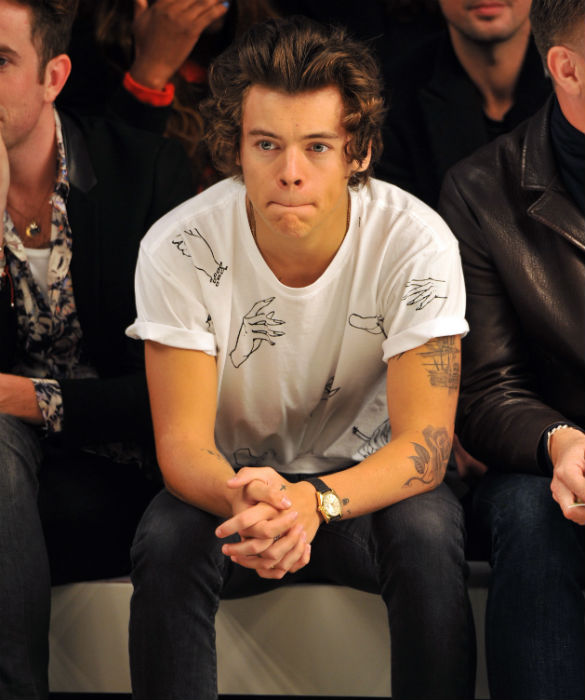 Harry Styles may be surrounded by people constantly during One Direction's Take Me Home tour, but new reports claim that the curly haired cutie has been suffering from "terrible homesickness and exhaustion," with the singer "desperate to chill with people away from the band."

Harry has to spend months away from his friends and family, with the band currently touring the globe with their tour, but sources have said that it might be getting a bit too much for the 1D stud.

A source told Heat magazine: ''He suffers from terrible homesickness and exhaustion towards the end of a tour.

''He often wakes his personal trainer Mark in the middle of the night because he's so lonely that he'd prefer them to work out together than be on his own.''

The insider continues to say that Hazza prefers "being away from his bandmates" when the group have some time off and is so desperate to see some familiar faces, that he is reportedly flying his father Des and sister Gemma out to join him in Australia so he has more company on the road.

The source explained: ''He wants people to chill with away from the band.''

It was previously claimed Harry stays with pal Nick Grimshaw when he's in London because he hates being alone in his own house, and that he stayed over during London Fashion Week.

A source said: ''Harry may have splashed the cash on his house, but if no one's sleeping over he hates staying there.

''It's depressing for him having the whole place to himself. He's used to having his bandmates around because they're normally flying all over the world, staying in hotels.

''So when he has free time in London, he now heads over to Nick's place.''

This report was quickly dismissed Nick Grimshaw's rep, who said that Harry hadn't stayed over once at the radio DJ's house during Fashion Week.

givemesushi
October 24th, 2013, 03:13 pm
ugh. I never get why celebrities, who probably have great tattoo artists at their beck and call, get such awful tattoos.

tellmeimawreck
October 16th, 2013, 11:58 pm
I understand it, tbh. A) spending 24/7 with the same guys would get hella annoying and I'd definitely want to get away from them and see other people when I could and b) living in cramped quarters with the same people 24/7 would probably make suddenly being completely alone in a big house really weird.

crash31
October 16th, 2013, 11:59 pm
That's funny considering everytime they do get a break, he flies to LA or somewhere else away from his friends and family.

noonecarez
October 17th, 2013, 12:05 am
and he doesn't always stay in the same hotel as the other boys. at least not when hes in major cities so

shayme
October 17th, 2013, 12:14 am
I find this so odd. I don't get how people don't. They're image is based around how they get along so well, but Harry is always off by himself with old people, his sister, or Lou.
(no subject) -

jbftw
October 17th, 2013, 01:36 am
exactly he's basically said he gets the least homesick out of all of them so this article is trying to stir up non existent drama

piratesswoop
October 16th, 2013, 11:59 pm
does he have jaundice or is that just the lighting in the photo

swissbeauty23
October 17th, 2013, 12:03 am
well where else do Hollywood Life and Radar Online and the like get their quotes?

Harry is so odd to me.

bloolikejazz
October 17th, 2013, 06:02 pm
yeah i think whoever wrote the article was probably just trying to not single him out

i mean yeah, the money, the traveling, the adoring crowds...it would probably get old after a while in some regard. i don't feel BAD for the guy, but i can see how it would make him irritable, especially if you're really only seeing your band and your team 24/7

ms_v_nessa
October 17th, 2013, 12:31 am
I see Harry as the one who loves all this the most tho *shrug* I mean, even on their break he's out at fashion shows with lots of attention and stuff. Tho if it's true then I can understand how someone could get tired of it all. I just don't think Harry feels that way.

I distinctly remember a GIFset where he was asked "do you ever get tired of the attention?" and he responded "no, it's fun".

he's also arguably the strongest singer in the group, so i could totally see him going solo in a couple years...that is, if Syco's leash isn't too tight, which it probably is seeing as they've just signed this huge new deal

Lol, I agree with you. Maybe not the strongest singer, but definitely the best voice. It's very unique.


Harry loves fame, and loves the fans(and he knows he's the most popular). I just get the feeling that he's ready to be on his own, as an individual.
(no subject) -

modern_toilet
October 17th, 2013, 12:17 am
i don't know i think harry is actually the one who is most happy go lucky and seems to always try to make the best of every situation and be nice to interviewers and stuff. the most irritable is definitely louis. HOWEVER i do think that harry has the most star power, and he knows it, so i think that'll be why he leaves the band first. someone like louis who might be the first to find the band irritating would be the last to leave because he will N-E-V-E-R make it solo.
(no subject) -

barbaragordon
October 17th, 2013, 12:18 am
same. I'd also bet on Zayn or Louis for different reasons. Harry seems to like fame while Louis and Zayn (especially Zayn) hate it. Also it doesn't help that the fans are constantly attacking their gf's.

zayn literally cares about nothing lol