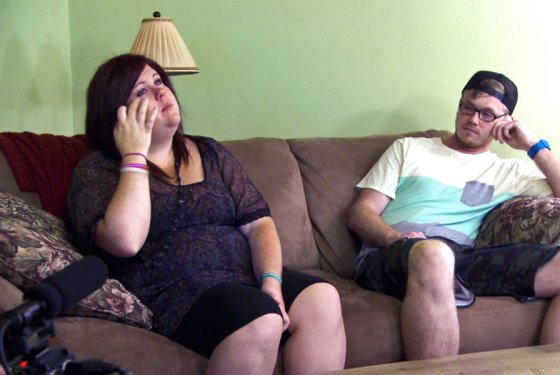 Catfish’s season two finale proved that it’s a lot less creepy when Sting says, “I’ll be watching you.” As for girls doing drive-bys at your work? Back. Away. Slowly.

Mike met Caroline on the dating site Plenty of Fish a year and a half ago, and despite both residing in Pensacola, Florida, they’ve never met. Oh, but they’ve tried. One tale involved a potential meet-up at Walmart; Caroline had a panic attack and sped off, as she had so many times before. As the episode goes on, the stories grow more worrisome; less sweet and shy, more stalker-ish. There are the notes Caroline’s friend left at Mike’s door, which referred to him as “boo-bear.” She texted him photos of the exterior of his workplace. “You have a stalker, and you probably know her,” one of the guys point out.

But Mike doesn’t reveal his hand straight away, making for some suspense. He, too, recognizes that Caroline’s behavior is questionable, adding more details as the truth slowly unwinds. It’s difficult not to see the truth when all the facts are laid out: Your online girlfriend, who lives in the same city, tells you she has cancer but still won’t meet you.

So yeah, the cancer thing. About seven months into their relationship, Caroline disappeared, later claiming that she had been diagnosed with colon cancer. Nev calls this the “worst kind of deceiving,” and it’s hard not to agree when screenshots of sad emoticon texts about chemo flash on the screen. Apparently Mike’s mom had colon cancer before he was born.

The digital proof doesn’t exactly work in her favor, either. There’s a second Caroline profile, with more pictures and information. Mike’s Caroline claims that they’re both her — one for each of her divorced parents’ last names — yet she won’t correspond with Mike on the other profile. Nev and Max message the other Caroline, as well as her friend, and video-chat with them both. When they show Mike the face he’s come to dream about, saying they’ve never spoken, they pan in close. His eyes water slightly. This is the exact moment his heart broke. As empathetic as they can be, I have to imagine Nev and Max feel like geniuses for figuring out how to engineer a moment so emotional.

As equally emotional: Nev and Max’s call to “Caroline.” The dialogue straddles that same loving/creepy line as “Every Breath You Take”: “I love Michael, he’s my Michael,” she says between sobs when the guys tell her the jig is up. “He’s the person that’s in my bubble that I’ve never let anyone else in at all.”

It’s kind of incredible just how much “Caroline” was doing wrong, but clearly she understood that cancer was her trump card. When she meets Mike IRL, she sobs and pleads for forgiveness, but it’s such an ugly hurt. She rationalizes away the lies: “When I said that I was sick, I was at the point where I could feel that you were going to leave … I don’t want to not have Michael in my life, no matter how I can have you.” There’s a whole ‘nother — equally suspect — story here. Caroline’s real name is Heather, and Mike does know her. As she walks up upon first meeting, Mike tells Max and Nev that he encountered her on Plenty of Fish before — and caught her pretending to be another woman, named Claire. Heather has a slightly different version of the story: She created the Claire profile with her friend to see if IRL Claire’s husband was cheating on her (not sure how that works but okay). Mike messaged “Claire” and, thinking he was “cool as crap,” Heather gave Mike her real number and revealed her true identity. At this point, she claims Mike “wasn’t very nice and didn’t want to be her friend.” So, as revenge, she created the Caroline profile to fuck with Mike. But oops, she fell in love and got scared and the words “colon cancer” popped out of her mouth. At the end of the encounter, she’s just a girl sobbing alone at a picnic table — a fate she earned.... Full recap here.

Heather’s Delusion Score (out of 10): 5.2 – Heather was a realistic player in the game, but she was delusional in thinking she could win in any sort of way.

Outcome: We caught ourselves a local catfish. 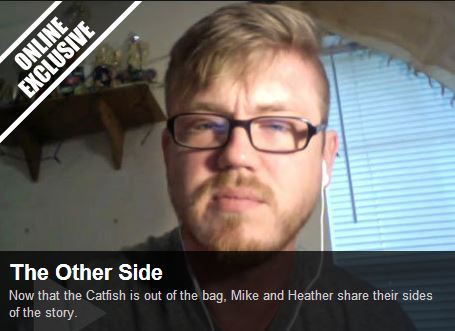