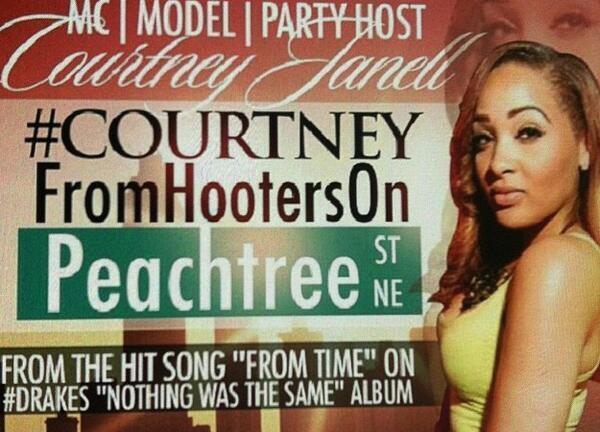 Drake is no stranger to name-checking his ex-girlfriends and former flings in songs and now one of them is using the rapper to promote herself. Courtney Janell, who Drake raps about on Nothing Was The Same's "From Time," is using the rapper's celebrity status and song shout-out in a promotional flyer for an upcoming party she's hosting per RealTalkNY.

Drake raps fondly of Courtney in the song and implies that she was the great love of his life. "The one that I needed was Courtney from Hooters on Peachtree/I’ve always been feeling like she was the piece to complete me/Now she engaged to be married, what’s the rush on commitment?" he asks.

After the song was released, the Internet was sent into a frenzy to find the mysterious object of Drake's affection. BuzzFeed shares that Courtney still works at Hooters in Atlanta. The model/party host (per the flyer) deleted her Twitter handle and Instagram account but others have reached out to her about the song.

“@_sGOD: Drake tried to wife Courtney from the Hooter's on Peachtree... Who is this Courtney?” @courtneyjanell" said Q while another person named Y Dot hit Courtney up directly. "ay @courtneyjanell drake talking bout u lmaooo."

Oh gawd, she is forever going to go by "Courtney From Hooters On Peachtree". Drake did her wrong for being too damn specific in that song, there is no way he thought that she wouldn't be discovered by the public.