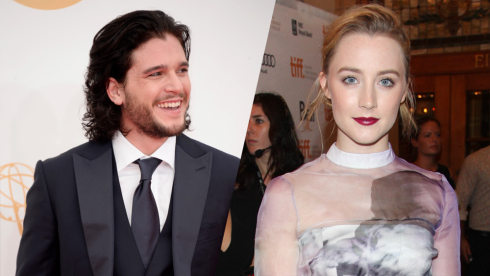 Kit Harington and Saoirse Ronan among thesps expected to test for Reed Richards and Sue Storm
With Simon Kinberg brought on to do a polish on the script, Fox is now preparing to test a handful of thesps for the roles of Reed Richards, aka Mr. Fantastic, and Sue Storm, aka the Invisible Girl, in the upcoming “Fantastic Four” reboot.

Sources tell Variety that Kit Harington, Jack O’Connell and Miles Teller are in line to get test offers to read for the role of Richards while Saoirse Ronan, Kate Mara and Margot Robbie are being tested for Storm. Michael B. Jordan is the only actor currently being mentioned as a possibility to play Johnny Storm, aka the Human Torch, but that could change.

“Chronicle” helmer Josh Trank is on board to direct, hoping to do for “Fantastic Four” what Fox recently did with the “X-Men” franchise — reinvigorate the series with a group of younger, rising stars and build the films around them.

The studio still needs a script before giving an official greenlight, but Kinberg is not expected to do a full rewrite, giving the studio time to begin working out test offers and check on availabilities of the thesps to make sure they can make the dates.

O’Connell is the one whose schedule may cause a conflict, since he is about to go into production on “Unbroken,” the Angelina Jolie-helmed biopic whose lensing may overlap with “The Fantastic Four” production, which Fox would like to get going in the first quarter of 2014.

No names have yet been mentioned for the role of the villain or Ben Grimm, aka the Thing. Gregory Goodman and Matthew Vaughn are producing the pic.

Saoirse was offered the parts of Tauriel in "Desolation of Smaug" and Wanda in "Avengers: Age of Ultron" but passed them both. Meanwhile she does "The Host", obscure indies that gets tepid reviews, and now potentially this. She's the most talented girl of her generation and should be snatching roles from JenLaw (and I say this as a big JenLaw fan), not competing with TV girls for work in second-rate franchises. Somebody needs to stage an intervention, because I love this girl so much but her career makes me want to weep.