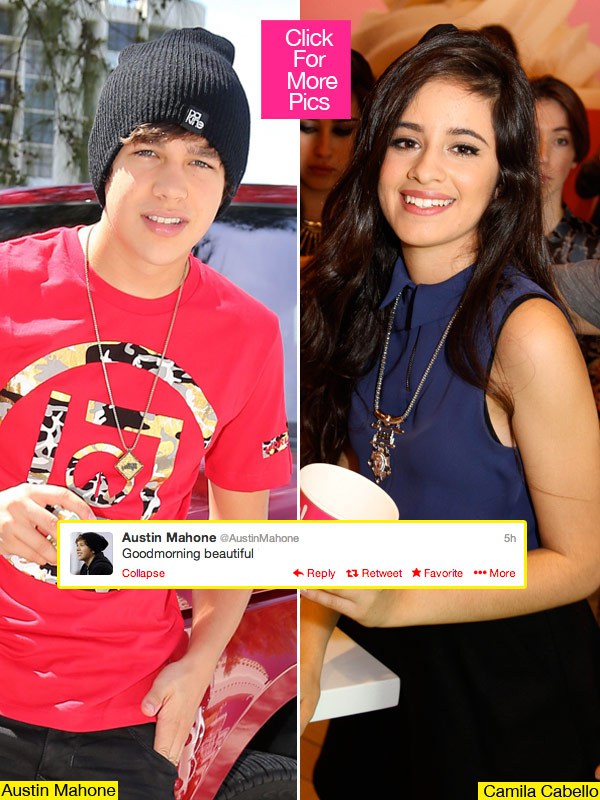 Is there a new romance brewing between Austin and Fifth Harmony’s Camila? The pop singer has been sending the ‘X Factor’ beauty some very flirty messages on Twitter and a new report confirms they both have crushes on each other. How sweet!

After meeting each other at the MTV Video Music Awards on Aug. 25, Austin Mahone, 17, and Fifth Harmony‘s Camila Cabello, 16, have remained in contact, and they’re “looking forward to hanging out together soon,” a source reveals. Could a new love be in the works? Read on for all the details!

Austin has a crush on Camila, and the feelings are mutual, according to a new report from People magazine.

“Austin caught Camila’s eye when they were both in New York for the MTV VMAs. They met the day before at the Arthur Ashe Kids Day and have been in touch ever since,” a source tells People.

The twosome first exchanged tweets in December when Austin showed his support for Camila while she was competing on The X Factor by writing, “Hey gorgeous! Good job tonight. I voted for you.”

“Austin thinks she is so cute and she feels the same. They’re staying in touch and are looking forward to hanging out together soon,” reveals the insider.

We hope it works out between Austin and Camila because they would make an adorable couple!

At the Young Hollywood Awards in L.A. on Aug 1, the “What About Love” crooner described his ideal girl to HollywoodLife.com EXCLUSIVELY:

“I like girls that are shorter than me, and a girl that understands my schedule. And has a nice smile and nice eyes.”

Sounds like Camila fits the bill! Plus, Austin is an Aries and Camila is a Pisces — two of the most compatible signs ever! Their romance seems to be written in the stars.

What do YOU think, HollywoodLifers – should Austin and Camila make plans to meet? Do YOU think they’d make an adorable couple?