Dan Harmon makes light of rape again; no1 is surprised 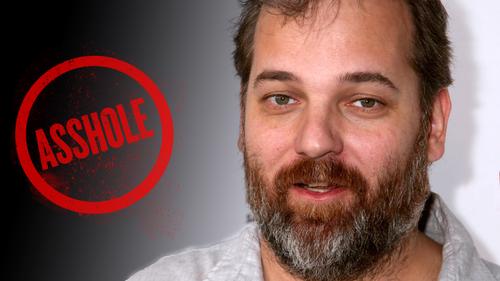 Dan Harmon is a colossal dick. Any modicum of talent he maybe possesses is besmirched by his colossal dickishness in every other gross pig way. He was such a colossal dick to work with, NBC fired him off of his own show (when your show is airing on a network that was run into the ground by hard-partying douchebag Ben Silverman, and even they won't look the other way on your cocaine-snorting workdays, you know you're a dick). Then, when they hired him back, instead of projecting a deservedly smug image, Harmon compared the season not run by him to watching his family "get raped on a beach." Pleasant.

After a string of half-hearted apologies (how seriously can you take a guy who describes himself "I guess I already knew this, but apparently, I’m quite a genius"), it seemed that Harmon was ready to hunker down and get back to restoring Community to its former glory. But wait, it's Dan Harmon, so he can't help but twist his doughy foot into his ever open mouth! This time by comparing season 4 of Community to Jeffrey Dahmer, who no big deal, just raped and murdered 17 people.

This weekend, Harmon was trolling Reddit and stumbled upon a subreddit [lol of course, all redditors are scum] that intimated that Season 4, run by showrunners Moses Port and David Guarascio, was so abysmal because Season 3, run by Harmon, wasn't so great itself. How did Harmon take this?


Saying season 3 sucked is like punching my brother. I wish it wouldn’t happen but my brother probably deserved it, he’s kind of nuts. But I love him, you know? I don’t talk to him, but he’s my brother.

Saying season 4 sucked is like punching…let’s say Jeffrey Dahmer. He’s from my home town, but I didn’t know him and he ate 17 people.

Saying season 3 sucked so bad that it made season 4 suck is like feeding my brother to Jeffrey Dahmer. I have no idea if he deserves it, it doesn’t matter if he does, it bums me out, there’s nothing I can do, but definitely no need to argue about it.

Cool. That's not batshit crazy, or completely offensive to guys who probably didn't want your dumb fucking job in the first place and tried to do the best they could with a show and working network relationship you ran into the ground, Harmon. Why apologize for rape references a few months ago, when you're just going to keep making them again?

In conclusion, you already knew this but Dan Harmon is absolutely fucking nuts. Please stop watching Community and fueling his equally crippling addictions to cocaine and narcissism masked as self-loathing.