LIFE. IS. COMPLETE: Britney Spears & Aaron Paul Tweet Each Other 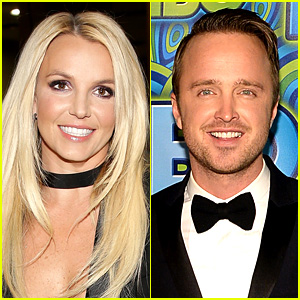 Add Britney Spears to the massive list of celebs who love Breaking Bad.

Aaron Paul, who starred as Jesse Pinkman on the hit AMC series, tweeted a link to buy Tom Neville and Zen Freeman's song "Dance Bitch" to Britney Spears, and not only did the princess of pop reply, but she also professed her love for the Emmy-winning drama.

@aaronpaul_8 Omg I can't believe you tweeted me. I love watching your show. Huge fan and yes, we can dance anytime!

This isn't the first time Britney has publicly professed her love for Breaking Bad—she shared her reaction to the series finale during a recent radio interview with Z100 (spoiler alert ahead!):

"Yes I did, I thought it was really sad," she said when asked if she bid farewell to Breaking Bad Sunday, Sept. 29. "I didn't like it at all. I didn't think he should have died…maybe they'll do another episode where the ambulance comes and revives him."

She's also not the first celeb who's admitted to being a die-hard fan of the show. A slew of stars, including Julie Bowen , Jimmy Kimmel, Kristen Bell and Ellen DeGeneres, to name a few—all took to Twitter last week to share their reactions to the epic final episode.

Now, let's get that "Dance Bitch" video in the works!