The Value of Overpaying Britney in Vegas + New Radio Interview! 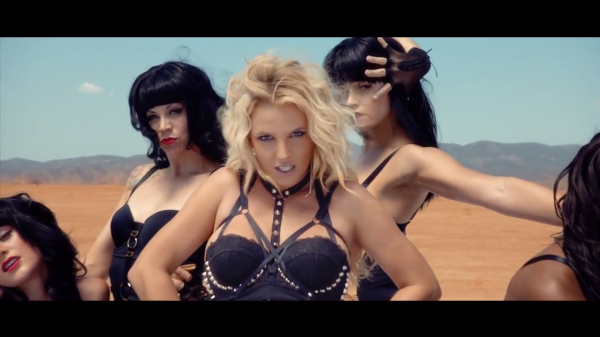 Britney Spears recently rode a helicopter into the desert and touched down in front of 1,000 fans to announce a brand-new residency at the Planet Hollywood Resort & Casino in Las Vegas.

The extravagance of the launch, captured as part of a special for Good Morning America, was only fitting: the “Oops I Did It Again” singer willreportedly pull in over $300,000 per night for nearly 100 shows in Sin City over the next two years.

“I’m working my derriere off for these shows to give you all a true piece of me,” she tweeted to her 33 million followers. “Pumped to see so many of you already buying tickets to come!”

Much of the press coverage she’s received since has focused on the size of her nightly fee. Billboard described her guarantee as “whopping,” while TMZ labeled it “titanic.” So is Britney being overpaid?

Certainly, if you take the angle that she’ll be earning eight times more in a night than most teachers and firefighters earn in a year. Definitely, if she ends up lip-synching the whole production as some havepredicted. Probably, if you consider the fact that her guarantee is higher than the average gross of the arena she’ll be playing in, according to Pollstar (though a sold-out show should generateover $500,000 in ticket sales).

In the strange world of Las Vegas showbiz economics, however, “overpaying” Spears could turn out to be something of a wise move. Pop stars of her ilk often get high six-figure nightly guarantees on the road; some A-Listers routinely break the million-dollar mark. In Vegas, Celine Dion gets nearly $500,000 per show. By comparison, Spears’ residency seems something of a bargain.

“If Britney were on tour and raking in $300,000 per show, nobody would blink an eye,” says entertainment attorney Lori Landew of Fox Rothschild. “It shouldn’t matter that the shows are limited to one venue in one town. From Planet Hollywood’s perspective, they’re not only getting a performer who is going to draw crowds, but they’re already getting publicity that’s worth way more than what they’re paying Britney.”

And in the desert, there’s more to it than just the publicity. Las Vegas is a metropolitan money-minting machine that relies on one crucial lubricant: visitors. When the economy is booming, so are the city’s casinos and shows. When it’s not, they’re in major trouble.

Between 2007 and 2010, visitor volume dropped 5%, leading to an 18% dip in gaming revenue. Since then, Vegas has been on an uptick, on pace to draw 40 million tourists for the first time ever. Lately, casinos and their associated clubs have been shelling out $200,000-$300,000 per night to DJs like Calvin Harris and Deadmau5 (see “Sin City’s Latest Savior“).

While $300,000 may seem like a lot to pay Spears, it certainly appears more financially reasonable in that context, particularly for a property that doesn’t have a hot nightclub to draw young patrons to its casino. And unlike most DJs, Spears is a live performer—even if she’s lip-synching, she’ll be dancing.

Still, there are some skeptics. One Vegas insider says the residency “feels like a dud,” noting that Planet Hollywood seems to be banking on selling out every show, a task that will be difficult “once the initial thrill wears off.” According to the source, the move seems like a desperation play by a hotel looking to broaden its appeal beyond “bargain-oriented tourists who are there solely because of a discounted room rate.”

Then again, Spears’ residency could be a boon to Planet Hollywood even if the outfit loses money on her actual shows–another one of Sin City’s quirks.

“Any star’s fee to play Las Vegas is fair because, bluntly, the casino promoters are not particularly concerned with who is on stage or in the ring,” says lawyer Bernie Resnick. “What casinos care about is whether the presence of the star will increase their nightly gambling profits, known as the ‘drop.’ If the star significantly increases the drop, the casino is justified in sparing no expense to stage a spectacular event.”

Resnick compares the philosophy behind Spears’ deal to the one behind Floyd Mayweather’s fights. The boxer is among the highest paid athletes in the world largely because of his lucrative Vegas matches and the casino traffic that inevitably follows.

“If Ms. Spears and her legion of fans do the same for her host casino,” says Resnick, “we should expect her to be a regular on the Las Vegas scene for years to come.”

Brit was also interviewed by a very sassy presenter on the radio! http://www.wbli.com/Player/102138341/