Britney is getting nasty in her new video as it seems those bull-whip lessons payed off! She also confirmed the premiere time on her Twitter account!

Celine Dion offers Britney some advice ahead of her Vegas Residency! 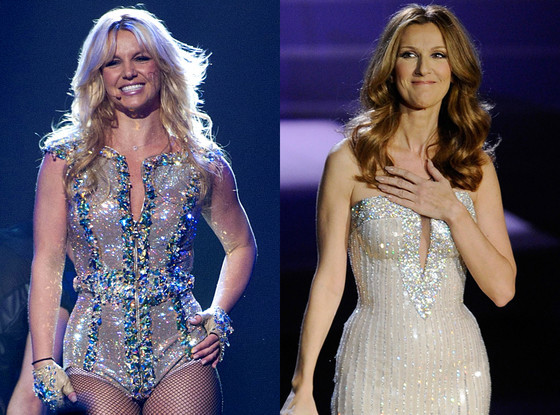 With a string of blockbuster Las Vegas gigs under her belt, Celine Dion is a veteran Sin City performer. And now, she has a few words of wisdom for the new kid on The Strip: Britney Spears, who is set to begin a 16-date Vegas residency in December.

"What I wish for her, especially as a mother, is for her to find wonderful people who can help her find a balance between the artist that she is and the mother, and to try and find an emotional balance to cope with those two and be the best of both worlds," Dion tells ET Canada in an interview set to air Tuesday. "I think she can really do it!"

When asked if she had any advice to give, Dion says Spears, 31, is already a pro.

"I don't think she needs any advice from me! She's been there, she's been on stage, she's shook it all out! She's very talented and knows exactly what to do," Dion, 45, notes.

New Rumors regarding the video! (take them with a grain of salt as always)

Details:
-The Dominatrix scene. That is all. You will all die.
-You haven't seen all of the outfits yet.
-The indoor dance scene is just l;ejtgls tjhlntirgl/tjhs/ltr
-The pool shots are kind of like...pointless. Still hot.
-I have seen a low quality version, but I can make out plenty.
-It was hard to see the desert dance scene, but it looks good.
-The mannequins scene is going to be the most gif'd thing about this video. Seriously, people are going to put like EVERYONE in place of them lol.
-There is a one surprise in the video I don't want to spoil...but this video is the best we've gotten in years. Better than anything, in my honest opinion, since the In the Zone era. Hold It Against Me is the only thing that could even come close but I am very, very excited about this and what it could potentially do for the single's longevity.
There will be a director's cut!!!
dancing the best I've seen her since post-breakdown. I am not exaggerating.