Meryl Streep Perfects ANOTHER Role; First Look at Meryl as 'The Witch' in "Into The Woods" 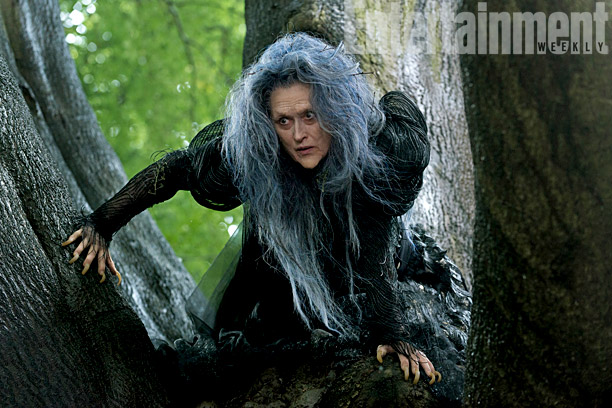 She’s not nice, she’s just right, she’s the witch. Check out the first photo of Meryl Streep as The Witch in the upcoming film version of the Stephen Sondheim/James Lapine musical Into the Woods. Rob Marshall (Chicago) is directing the film, which started production this week in the U.K.

In the photo above, Streep takes on a terrifying yet high-style version of the character –which was originated by Bernadette Peters on Broadway in 1987 — complete with yellowing talon-like nails and a feathery frock.

But no one is alone. The musical is a twisted fairy tale featuring a number of classic characters including Cinderella, Rapunzel, Jack (of beanstalk fame), and Little Red Riding Hood, all connected by The Witch’s powers. Streep joins Johnny Depp (as the Wolf),  Anna Kendrick (as Cinderella), Chris Pine (as Cinderella’s Prince), and Emily Blunt (as the Baker’s Wife) in the film, which is scheduled for a Christmas 2014 release. That’s a lot of midnights away, but it looks like it will be worth the wait.