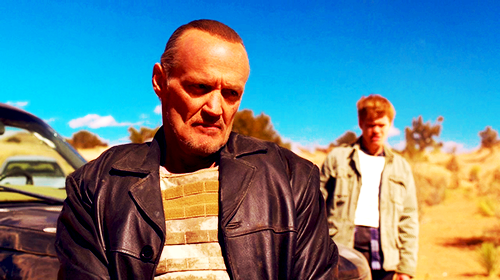 Of all the formidable villains on Breaking Bad, Uncle Jack is the one who finally gets the best of Walt. He may not be as mercurial as Tuco or as calculating as Gus, but his sociopathic, mercenary ways make him the most dangerous foe on the show — not only killing Hank and Gomez but also stealing the lion’s share of Walt’s $80 million (not to mention he killed ten imprisoned men in the space of two minutes and later slaughtered Declan’s entire crew). We talked to Michael Bowen, who plays Uncle Jack, about Aryan gangs, guitar-playing with Jesse Plemons, and the backstory behind Uncle Jack and Todd (and the spinoff show it deserves).
How did Vince explain the character of Uncle Jack to you? Jesse Plemons told us that he and Vince talked about Todd as being a bit militant. How did you guys talk about Jack?
If I remember correctly, he told me he's just a vile human being but you want to be next to him. That rang a bell. Then he said, in his inimitable way, that Jack is just [in Vince Gilligan’s voice] badass. And then I remember he said something about Sergio Leone. Then I got it. I love the old spaghetti Westerns — I love the almost-cartoonish drama. At the end of the day, it's a style, and I think Vince conveyed that to me. So those are the two key words I remember: badass and Sergio Leone.
Did you create a backstory for Uncle Jack and Todd? I'm curious as to whether Jack raised Todd and what Todd's parents were like.
Yeah, absolutely. Jesse and I did that. We felt like Todd was in danger as a little boy with a drug-addicted mother — my sister. She had a revolving door of abusive boyfriends that Jack was tired of murdering constantly, so Jack got Todd out of there.

It sounds like you guys need a spinoff show of Uncle Jack and Todd growing up together.
That'd be awesome! That'd be great. Just a couple of sociopaths.
It's weird to think of Uncle Jack as the good guy in that scenario, saving his nephew from a horrible situation.
Well, you know, it’s within his universe. After studying the Aryan gangs and stuff like that, they're such a small fraction of the population in the prison system, yet they commit like a quarter of all of the most vile, gruesome murders in the system. They have to do that because they are such a small group. They have to become so frightening that you don't mess with them. [Jack] knows to get into a gang like that, you must spill blood. And the only way you get out is if you are killed. So that's the reality he probably told and showed Todd.

So when he finds out that Todd killed the boy on the motorcycle, do you think there's a little pride in him?
Absolutely! Because he took care of business. It was a bad problem that arose. Everybody else may have shuffled their feet, but he took care of business. That's an amazing quality. He's growing up to be a perfect, wonderful psychotic and sociopath.
You got that sense also in the scene where Todd's describing the train heist. It's kind of a coming-of-age story, and Uncle Jack is like, "Aw, he's all grown up."
That's exactly right. I was looking at him just like that. Here he is telling this crazy story, man, and he's not regretting any of it. He's reveling in it. And yes, I was proud. It's funny you say that because that's what's written on that script. "Proud proud proud." That's what I wrote as a side note.

Walt has this crazy reputation: He’s Heisenberg. But Jack never seems remotely scared of Walt. Is that because nothing ever fazes him? Or do you think he's underestimating Walt's power?
You gotta understand, if you study these [Aryan] people — any prisoner, but these guys in particular because they're such a small group ­— what they've been through on the inside, nothing on the outside would scare them. So Jack's not really scared of anyone. I don't think Jack underestimates him. I looked at it as though Jack was intrigued by Walt in the same way that a sniper is intrigued by his target. So that's how I approached that. And this plays well. I don't like watching myself, but I didn't have too much trouble watching “To’hajiilee.” I'm glad it came out the way it did.
I know you and Aaron Paul were both in Last House on the Left and I believe he killed you in that movie. What was it like to work with him again, in sort of a role reversal?
He's really great. Talk about somebody joking around between setups. He’ll tell some horrible joke and two seconds later you’re rolling, and boom: He's crying, tears are coming out. He's just badass. Badass.