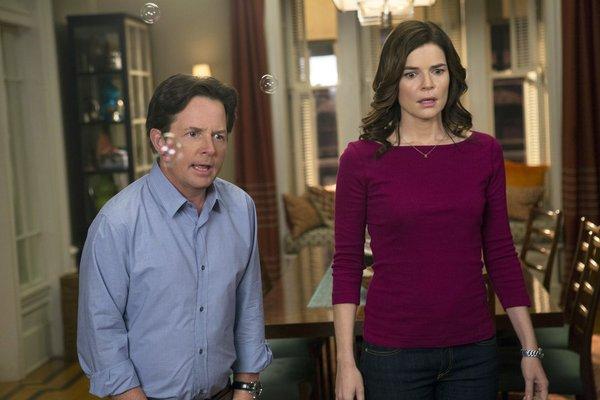 Betsy Brandt knows how lucky she is.

She’s part of Breaking Bad, which just won the Best Drama Emmy and wraps up its successful run this Sunday. And she’s now playing the wife of Michael J. Fox in the actor’s high profile return to the sitcom world in The Michael J Fox Show, which debuts tonight. Not too shabbyy, right?
I sat down with the vivacious Brandt recently to talk about the different roles in two very different series, along with whether she misses her Breaking Bad character. Read on for excerpts from our Q&A...

TV Fanatic: So, obvious question, you’re going from Marie to Annie, from drama to comedy. Has it been a fluid adjustment for you?

Betsy Brandt: It’s been great. I mean, it’s new. Yeah, it’s totally scary. It’s scary enough to be perfect. Like, you should be doing something new. I’ve never done a half hour comedy before and so it’s really, really fun for me at the end of the day. It’s super fun.

TVF: Is Annie someone you connected with pretty quickly, or are you still getting to know her?

TVF: Since you’re a mother in real life are you going to learn from Annie, or could Annie learn some things from you?

BB: I think both. The other day I had a moment, I was like, ‘Oh my God. This is an Annie moment,’ which I think is a good sign. About the show too, like those are the comedies I like.

TVF: So much of the pilot is about Mike’s journey going back into the field and everything. What will we see looking forward with Annie’s journey, because it’s also an adjustment for her that the home life is changing?

BB: Mom life, Mom stuff and wife stuff and just things for her. I love the relationship this family has with each other. And then I love that I get scenes with Wendell Pierce, who has been a long time friend…and then, Mike’s sister, played by Katie Finneran, and she and I just have a ton of fun together. It’s been a really good time and I just love it.

TVF: How has working with Mike changed your own perception on Parkinson’s and people living with it?

BB: I mean, there are probably many more details about Parkinson’s that I didn’t know…and then just working with him, you get a little more familiar. But, really, I think the biggest thing with working with him, is like, I love him even more. The more I work with him, the more amazing I think he is.

TVF: I’ve always heard he’s like one of the nicest guys.

BB: The nicest, smartest, meticulously handsome, he makes me laugh…Mike smiles or laughs and his face, like, he gets this grin when he cracks you up and it’s just great. It’s great.

TVF: Anne Heche is coming as a nemesis for Mike in the series. Is she also that for Annie?

TVF: I have to ask a Breaking Bad question.

TVF: I know you can’t tell me much, but how are people going to feel about these last episodes? What do you think? [This interview was conducted just as the final 8 episodes began airing.]

BB: Love them. They’re going to love them. I feel as if I should’ve seen some of these things coming because I’ve been on this show for how many years now and I just get it. Breaking Bad is not cheap and shameless. Like there’s no shark jumping. After I read the last episode, I told Vince Gilligan I said, ‘It’s the perfect ending for this show.’

TVF: That’s awesome. How much are you going to miss Marie?

BB: No. I miss her…I shouldn’t call it a once in a lifetime experience, because most actors are never going to be on TV on a show like that and I’m so grateful, and I’m aware. So it’s not like, ‘Oh I thought they were all like this.’ Like, I’m aware. I’m very aware how lucky I am. Not only that, I get to work with some of the most wonderful people in the business on that show, when I thought, ‘Okay. Well that’s not going to happen next time either,’ and then it did.

source
I really liked the show.  I'm just concerned that Michael will not be able to keep up with it in the long term.  Mike's boss Wendell is a hoot, love him and Mike's sister Leigh