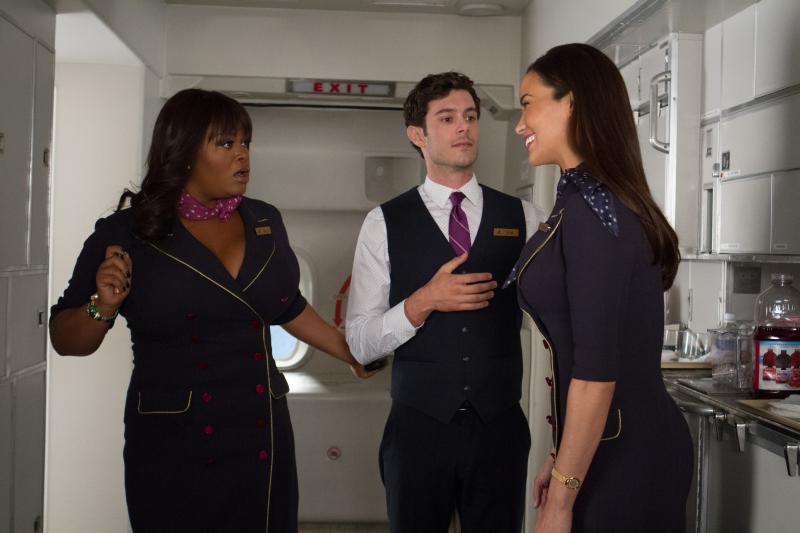 As many of us know, David E. Talbert’s film, “Baggage Claim”, opens in theaters on Friday, September 27th. As I have mentioned previously, I loved the film. It was witty, cute, and funny.

I’ll release my final review for the film on Friday, however, today, I’d like for you to check out the interview that I did with cast member Jill Scott.

In this interview, Jill reveals her thoughts on the amazing energy of the set of "Baggage Claim," talks about her challenging audition with the late film director Anthony Minghella, and explains a bit why she will not be on Broadway any time soon.

Shadow and Act: Can you tell our readers about your role in Baggage Claim?

Jill Scott: I play Gail Best, who is one of the best friends to Montana Moore, played by Paula. Gail is feisty, sassy, and confident.  She’s kind of a man killer, with no feeling of remorse about it. While Montana is searching for love, Gail is interested in the fun of right now.

SA: How did this project come about for you?

JS: My agent sent me the script. I get scripts all the time, but I read this one thoroughly, and I loved it. It was light hearted, cute, sweet, and funny.  I told my agent that I liked the script, but I did let my acceptance of the role slide a little, until I was watching television one day; scrolling through the stations, and there was this play. And I don’t like plays made for the screen. But, this one, “Suddenly Single”, caught my attention.  Isaiah Washington acted his butt off as well as everyone else. I couldn’t turn from the play, and then at the end David is on the screen saying, “Hi, I’m David Talbert…”and I was like oh that’s the dude that wrote Baggage Claim? Oh, I’m in!

SA: How was the set culture of Baggage Claim? Can you tell us about the camaraderie?

JS: It was really cool. Every other day, we saw somebody new that we hadn’t seen before.  Jenifer Lewis will keep you going. She has so many stories, I love when I am around a veteran in this business. Because I can dig and ask questions, and find out the “who” and “what” of it all. I love that. And then I met Lauren London who I hadn’t met before, and we just hit it off, like we were always supposed to meet. Adam Brody is this quick witted, intelligent, really cool guy. We hit it off immediately. I just like him. I fuck with Adam. We talked a lot of politics, and it was good.

SA:  I read in the production notes that you really thought that the energy was great on this set. Can you explain to us exactly what you mean?

SA: Well, we hear the phrase a lot from people of all industries. When you made that statement, are you saying that everyone on set was simply nice, or are you saying something else?

JS: Being on set is a hard thing. A lot of people are like oh, you get to make a movie, and it’s all fun.  But the reality is, it’s a lot of hours. It’s a lot of reshoots; it’s a lot of waiting. And you can become increasingly agitated by the amount of time that you are waiting. But that’s real. But when you have a cast and crew of people who make it light hearted and crack jokes, and break treats, and understand that we are all in this together. That’s a biggest plus that you can have.

SA: How do you balance music and acting? And do you want to get more into acting?

JS: Balancing is hard. I’ve lost roles that I really wanted because I had set up a tour.  I cancelled tours to do roles before. But I have to find the time to make that up to my audience. I made a commitment to them. Singing and acting suit me. I made a vow to myself, to do everything that I can do with this life that I have, and I have to find the time to do this. Sometimes I need to be an actress.  Sometimes I don’t need to be Jill. However, everyone is always looking for the Jill in everything.  People say that they like the characters that they believe that I am. But, I don’t as much.  I like the characters that I believe that I am not. Like my role on Law and Order. That character unnerved people. And I loved every second of it. I want to continue growing as an actress. There are ways that I can reach quicker, or deeper, with acting.

When I auditioned with Anthony Minghella (The No. 1 Ladies Detective Agency), I loved the audition process, although I hated him for it.  Because he had me audition six times for that role. Maybe three hours each. He wanted to see how quickly I could vary. So, he says you have a broken left rib, you have a sprang ankle… he kept finding things to keep challenging me. And I said to myself, you know what? I’m going to go in with this… I saw his work with, “The Talented Mr. Ripley”, and I love Gwyneth Paltrow, she’s one of my favorites. But I’d never seen her that good before. And I did not know who Matt Damon was at the time.  I fell in love with him. Jude Law was amazing. So, I was like, here I am working with the director that worked with them, so I was like I am here to do what I got to do.

SA: Do you plan on going on Broadway?

JS. Everyone keeps on asking me that. I’ve been. And that’s a rough life. It has to be something worth it. And I wouldn’t want to sing at all. The character would really have to push me to another level.