The Glamorous Life: A Shoeless Beyoncé and Blue Ivy Jet Out of Puerto Rico 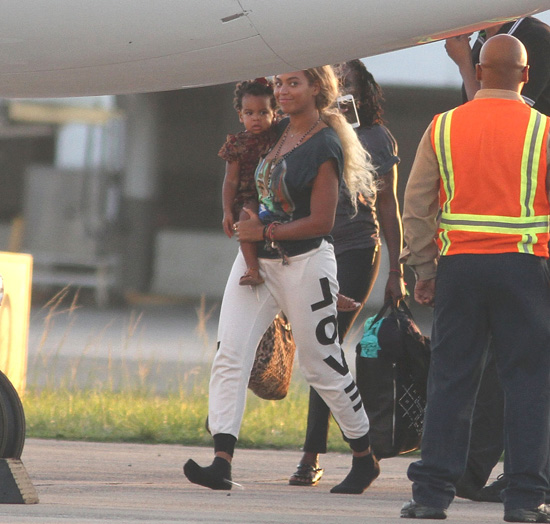 A sock-wearing Beyoncé was spotted at an airport with her daughter, Blue Ivy Carter, in Puerto Rico on Sunday. The singer is currently in the middle of the Latin America leg of her Mrs. Carter Show World Tour, which she has already taken to Europe and North America. However, she isn't expected to play in Puerto Rico until later this month, so it may have been a layover. Aside from bopping from stadium to stadium in Latin America, Beyoncé has been enjoying the sights and sounds of the countries south of the border. She shared snaps of her trip to Brazil last week, including photos of herself holding up a Brazilian flag rug and meeting with children at a public school in Rio de Janeiro.

Beyoncé is getting ready for two shows in Mexico, one in Monterrey and the other in Mexico City, later this week before she lands back in Puerto Rico for a concert in San Juan. After that, Bey will head to Australia and New Zealand to continue her tour.