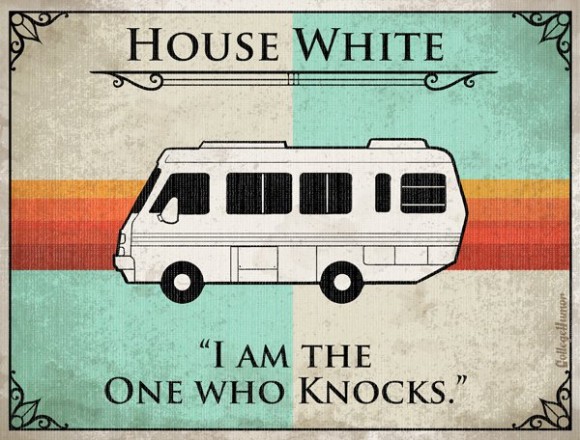 Amazing series.  Amazing episode last night.  Talk about a gut punch.
Walter White is a bigger monster than anyone in Westeros.
(I need to do something about that).
This is the final season of BREAKING BAD. I think GAME OF THRONES may have a shot at upsetting BB for this year's Emmy (only a shot, though, I think they are the clear favorite), which pits us against their previous season...  but there's no way in hell that anyone is going to defeat BREAKING BAD next year, when their last season is the one in contention.
Admittedly, trying to handicap the Emmys is a mug's game.  You never know.  But for what it's worth, I think this year is our best chance of actually winning one.  Given the splash the Red Wedding made, our profile is likely as high as it is ever going to be.  We had a great season. If the Academy is ever going to give their ultimate accolade to a fantasy show (something that is by no means certain), it's going to be this year, I think.
But we'll see.  BREAKING BAD, MAD MEN, DOWNTON ABBEY, HOMELAND, and HOUSE OF CARDS will have something to say about that as well.  All good shows, I think.  A couple are great shows.  HOMELAND is the defending champ, MAD MEN's won four, and HOUSE OF CARDS has that whole "gamechanger" thing going for it.  Should be an interesting race.  We'll all know on September 22.

Get Tyrion to fill this dude's chalice he is thirsty.