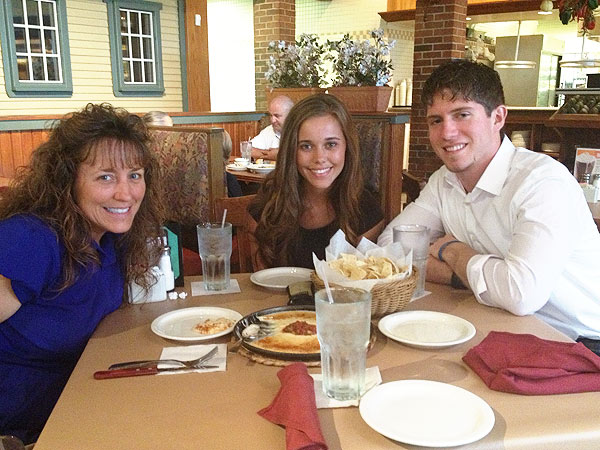 Could a Duggar daughter be preparing to start a family of her own?

Jessa Duggar, 20, the third daughter of Jim Bob and Michelle Duggar of Tontitown, Ark.,has entered into a courtship with Ben Seewald, 18, who lives in nearby Hot Springs, Ark., PEOPLE confirms.

The couple's relationship will be featured on the family's TLC show, 19 Kids & Counting, which returns Tuesday at 9 p.m.

"We are so excited for Ben and Jessa," Jim Bob, 48, tells PEOPLE. "They are enjoying getting to know each other and are recommending sermons to one another."

So what are the differences between courtship and dating?
Jim Bob explains: "Courting is getting to know each other in a group setting, both families spending time together and the couple setting goals together to determine if they are meant to marry. With dating, a couple will often pair off alone and that sometimes leads to a more physical relationship."

Jessa and Ben met in church, Jim Bob says, and then asked to correspond via text and on the phone. The Duggars agreed – and were kept in the conversation as the couple texted each other, mostly asking each other questions about theology and scripture.

"Jessa has a very steady personality," says Michelle. "It has been interesting to watch their interactions because for her personality type, they share very similar beliefs. It has been fun to watch them and both of our phones are going off back and forth, ping, ping, ping."

"Courtship is not just about having fun," she continues. "You are really considering if this person could be your life partner – you pray about it and see what happens."

Though other men have approached Jim Bob to ask if they could begin a relationship with Jessa – as well as his other older daughters – Jim Bob says that Ben is the first to make the cut.

"He's the first one she has shown interest in that has a spiritual focus and legitimate calling about ministry work," he says. "When a guy is pursing your daughter, you want to check him out and see if there are any red flags and with Ben, there hasn't been. He is very sharp. It appears like a match made in heaven."

Like her older brother, Josh, whose courtship with now-wife Anna was documented on their reality show, Jessa will save her first kiss for marriage.

"Dad allowed them to do a side hug when they were officially courting," Michelle, 47, explains. "Jessa and Ben have said that was the only contact they would have, when they initially greet each other, when he comes to visit for their first hello, they have a quick 30 second or less side hug and a goodbye side hug and they agreed that would be the only contact they should have."

"They want to wait on the physical relationship until later," she adds. "If there is an engagement that comes about, they will work together on their goals and standards for that."

Jessa and three of her sisters – Jana, Jill and Jinger – have just completed the book Growing Up Duggar, to be released next year, about their relationships, including their thoughts about boys and what goes into deciding who and when to marry.

"It is sweet as a mom to watch Jessa go through this," says Michelle. "She's always been the organizer in our family unit and right now she is a little distracted. She and Ben are open to encourage others who may be considering relationships that you can stay morally pure and wait for the one God has for you and then on your wedding day, begin the physical aspects of your relationship."

"All of our family is involved in this relationship. It is an exciting time."