Q&A with Greg Sestero about his new book The Disaster Artist: My Life Inside the Room, the Greatest Bad Movie Ever Made. 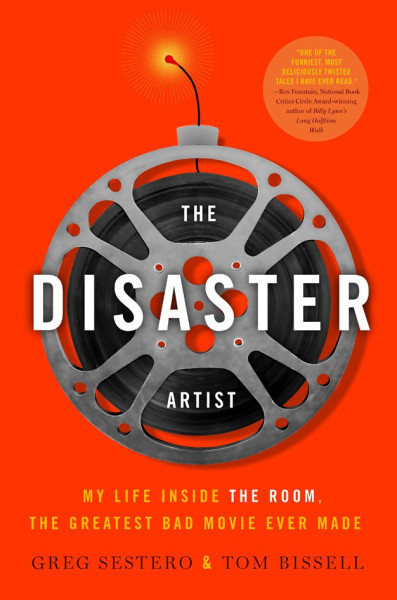 If you’ve seen The Room, you undoubtedly have a lot of questions about Tommy Wiseau. Where is he really from? How did he blow $6 million on such a catastrophic movie? Who taught him to play football in a tux?

Greg Sestero starred in the film as Mark, the professional best friend of Wiseau's character, Johnny. Sestero's new memoir helps answer at least a few of your burning questions about the hilariously awful film. A+ Crafty Lady Callie did her best in our October/November 2009 issue of BUST to get to the bottom of Wiseau's bizarre personality, and now we have The Disaster Artist to shed more light on what went on behind the scenes of the cult classic.

In the book Sestero tells us how he met Wiseau, how he ended up starring in the “greatest bad movie ever made,” and shares his personal experiences as an actor living in Los Angeles and San Francisco. As a fan with more love for The Room than you can throw a plastic spoon at (plus not one, but TWO signed posters of Tommy Wiseau’s face), I was more than stoked to talk with Sestero about The Disaster Artist and all of his ridiculous experiences as Wiseau's best friend, both on and off the big screen.

What was the most difficult part of writing The Disaster Artist?

I never could've imagined the level of difficulty and involvement writing a book would entail. My goal, along with my co-writer Tom Bissell, was to write something first rate about the worst movie ever made. I wanted it to be a book that anyone could pick up and get lost in, knowing nothing about The Room. Needless to say, It took over my life for three years.

In the book you alternate between quoting two different movies at the beginning of each chapter: The Talented Mr. Ripley and Sunset Boulevard. Anyone who reads the Disaster Artist will undoubtedly understand why Ripley is there, but could you expand upon why Sunset Boulevard is relevant to your story?

Sunset Boulevard is about an older Hollywood star trying to create a dream showcase project for herself with the help of a younger person she meets in a random and unpredictable way. Norma and Tommy aren't the same person at all, and I'm not at all like Joe Gillis, but its story of how hunger for stardom can change and deepen (and destroy) a relationship seemed really relevant and highly applicable. Plus, at one point in the book, Tommy and I pull off of Sunset onto the street that Joe Gillis pulls off of right before he meets Norma!

The way you speak about Tommy in the book reveals all different sides of his personality. The reader will inevitably be annoyed by, embarrassed for, and amused by Tommy. By the end, you come to understand him and why he is the way he is, at least to some degree. Other than writing a memoir and explaining your own involvement in the film, was this one of your goals in writing the book?

I've always thought Tommy was unusually intriguing and utterly unique. Everything about him is inexplicable, much like his film. The Room is Tommy. It rips open his psyche in ways he can't even see. I felt compelled to try to explain what he was trying to accomplish with The Room. The film is now beloved for being a comedy of errors, but there was a very sincere and deep intention behind it. Anyone who has seen The Room has many, many questions. I wanted to get to the bottom of the mystery, and show the rewards and perils and power of having an artistic vision you're 100 percent committed to expressing.

How does Tommy feel about you revealing so many details about the filming process and his personal life?

Tommy was supportive of my book project and generously invited me to go on tour with him while I wrote The Disaster Artist. This allowed me to understand and get to know him differently. Watching his dream come true, but in the opposite way. During interview sessions, I was surprised at how many memories Tommy had locked away. How, beneath the vampirish exterior, there was someone very human and sincere and tortured and misunderstood. I wanted to give him the chance to tell his story.

How do you feel about the way that The Room has affected your career? In the book you talk about how happy you are that the movie brings people together (like when your family watches it for the first time) and how it’s more of an “experience” for viewers and cult film fans. But on a personal level, are you happy with the way things have transpired, 10 years later?

It has offered me the chance to meet many wonderful people around the world, and to write The Disaster Artist, which was an incredible experience. The support from fans has been tremendous. The Room is obviously never a film that you would show anyone in a professional sense, but it makes people happy. Makes people laugh and brings them together.  I'll always be grateful for the experiences The Room has brought me. I am definitely looking forward to going in a new direction and doing projects that I'm passionate about.

Over the course of your involvement with The Room, what's been your favorite memory or experience?

There have been countless memories I can't unsee. Watching Tommy try to say "Oh, hi Mark" while stumbling out of that shed on a parking lot rooftop set. The casting process in which Tommy asked actors to react to their "sister just becoming lesbians". Watching my family's reactions to the dailies of filming and never seeing them laugh so hard. It was overwhelming to travel to places like Dublin and London and see the joy on people's faces. It's amazing to see how far the film had traveled. The most incredible experience was when The Room sold out the Ziegfeld Theatre in NYC, and when I heard the theatre manager say it was the first time the theatre sold out since the re-release of Star Wars. I thought, “What has the world come to?”

Be sure to pick up The Disaster Artist when it drops October 1! It's already receiving rave reviews from official book reviewers, comedians, actors, and basically anyone with taste.