Justin Bieber hangs out with Mayweather before the fight 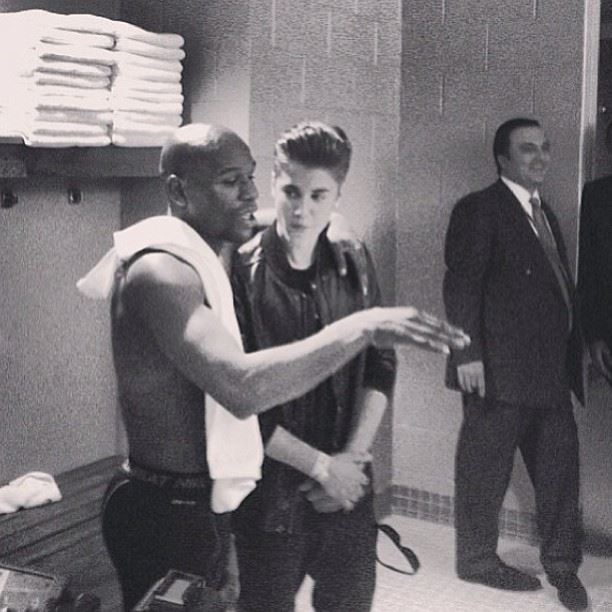 Talk about a tag team duo! Just hours before Floyd enters the ring for a welterweight title match against Canelo Alvarez on Sept. 14, he is leaning on his biggest supporter to — that’s right, Justin Bieber.

Floyd Mayweather Jr. may be the biggest name in boxing, but we’re more impressed by the company he keeps! After walking into the ring accompanied by Lil Wayne before his last match on May 4, the undefeated boxing champ got his pre-match celebrity fix on Sept. 14 by hanging out with Justin Bieber.

It definitely doesn’t look like Floyd is too worried about facing off against Canelo Alvarez at the MGM Grand Garden Arena in Las Vegas on Saturday night. He’s just chilling with his main man Justin!

Less than 24 hours before the main event, Justin posted a black and white picture of himself and Floyd chatting and getting chummy. Justin might be the biggest Floyd fan on the planet, so it’s no surprise that he was promoting the fight: “Go to showtime.net to get the fight and support the champ @FloydMayweather. I’ll be there too,” Justin captioned the pic.

Though there’s no way to know what these two are chatting about in the picture, we like to think Floyd is giving Justin a few tips for the next time someone tries to attack him in a nightclub.

Justin and Floyd go way back. When the boxer went head-to-head against Miguel Cotto on May 5, 2012, the Biebs was right there throughout the whole fight. He walked Floyd to his corner and even got to go into the ring and pose with the championship belt after the match was over.

“Hard Work & Dedication . congrats champ . glad i could be a part of it,” Justin tweeted at the time.

As Floyd looks to stay undefeated against Canelo Alvarez on Sept. 14, you know the Biebs is going to be shouting encouragement ringside like the true fan he is.