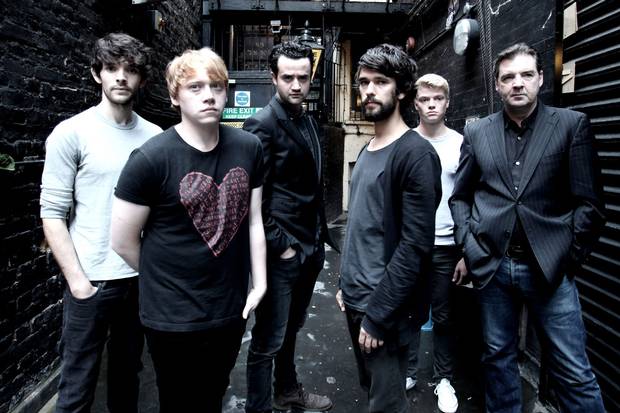 Grint, 25, joins a stellar cast including Ben Whishaw, Colin Morgan from Merlin, Downton’s Brendan Coyle and Daniel Mays in the play Mojo, set in Fifties Soho, which reunites Jerusalem writer and director Jez Butterworth and Ian Rickson on their first hit. Plays from Oct 26 through January 25 in London's West End

Grint said he knew all eyes would be on him. “There are going to be expectations at my first stab at it. I’m trying not to think about it too much. It is something that really scares me. But part of it is I want to do something that scares me a little bit. It’s quite good to challenge yourself  now and again.”

Radcliffe, who has recently finished a West End run in The Cripple of Inishmaan, obviously adored theatre, he said. “Dan has always said it’s a great thing to do and he absolutely loves it. Just watching him enjoy it told me it must be quite fun.” Grint, who last appeared on stage aged about nine as Rumpelstiltskin in a school production, said he needed a break from Potter before making his stage debut — though he has done several independent films.

“I think I just needed time to find myself a little bit. It was 10 years of doing the Potter films and it was quite suffocating,” the Stevenage-born star said.

And money was obviously never a motivation. Grint, who has bought an icecream van and invested in property, said: “I never felt to be in a rush to do everything and so I’m quite careful when I choose things.”

Grint plays “quite naïve” Sweets in the gangland drama. Rickson, who was told by Potter director David Yates that Grint was “special,” hopes he might “attract some people that may not ordinarily see a new production of a modern classic”
(tickets can be purchased here)


Trailer for those who haven't seen it