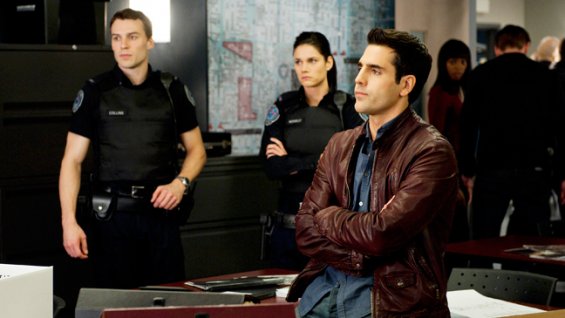 [Warning: Some spoilers ahead.]

Is 15 Division in danger of losing key players?

The second part of Rookie Blue's season four finale finds the cops and detectives of the precinct pulling together all available resources to track down the dangerous and unpredictable suspect Kevin Ford (Michael Cram), who has kidnapped veteran officer Oliver Sacks (Matt Gordon) in retaliation. The closer serves as a dramatic peak to a season that has featured everything from new romances and a wedding to mental illness and new partners...

To preview the final episode of the season, co-creator and showrunner Tassie Cameron jumped on the phone with The Hollywood Reporter to discuss the repercussions of last week's penultimate hour, Andy's romantic future and the dangers within the walls of 15 Division.

The final episodes of a Rookie Blue season usually up the ante for everyone in 15 Division, and this season, the Kevin Ford case has touched everyone, either emotionally, mentally or physically. Was that always the intention?

It was always the plan, or at least the hope. We found that the two-parter works well for us. It's worked well for us in the past and we have that in our minds of doing some sort of a big, exciting, emotional [finale]. Often they schedule the last two episodes on the same night, so that's part of it, but they haven't this year. In season four, the ensemble nature of the show has kicked in — in a good way — and our viewers care not just about the Sam (Ben Bass) and Andy (Missy Peregrym) of it all, I think they care about the other characters and we wanted this to become a dangerous, emotional crucible for everybody. Going with the idea of the theme of this episode that in times of great stress and chaos, often the truth is revealed, so we tried to play that out in everybody's storylines in major ways and minor ways.

Over the course of the season, Chloe (Priscilla Faia) has integrated herself into the Division in a significant way and last week's episode saw her the victim of Kevin Ford's rampage. Why did you feel it important that she be the one to get shot?

More stuff happens to our more regular characters. The Chloe of it all, you never know when you're casting a new character whether that person is going to have the right chemistry. In the case of both Chloe and Marlo (Rachael Ancheril), we got it right. We added two amazing people to the cast. By the time we'd come to write the finale, we all loved [Chloe] and putting her in this kind of danger seemed interesting because she's newer and hasn't been in this type of danger before, but it helped refresh the premise a little bit, that at the show's core, is about people who are rookies and still learning.

We also found out in last week's episode that Chloe is married. How is that going to affect her decision-making process in regards to her future and her care in the finale and maybe beyond?

It's a huge part of that storyline the fact that she's married. Not only was it a shocking surprise for Dov (Gregory Smith) and I hope, for the audience, especially given the whole season Chloe has been proclaiming what an open book she is and how that's her brand. We knew that there was going to be a big secret in Chloe's past — there was some debate about what it ended up being — but this had always been on the table since her character was introduced. It won't just be a shock for Dov, it's going to have impact on what happens to her.

It's still up in the air. We love him. He's a busy guy. We'll see how it goes. We'd love to get him back but we haven't really arced out the season. We have some ideas.

How surprised are you by viewers' reactions, either positive or negative, to the Andy and Nick (Peter Mooney) relationship over the course of the season?

How surprised? I wasn't surprised at the intensity of the reactions. [Laughs] It's hard to surprise me on that now. I kind of learned how it was going to be after we stabbed Jerry [in season four]. I wasn't surprised. It's never fun getting the tirades over Twitter about what are we doing to their favorite couple. It's not a pleasant experience, but you kind of know going in you're going to ruffle some feathers when you bring in a new love interest for your lead. Especially in the case of Nick, we set a goal for ourselves, which was to see if we could really build a serious and viable love interest that we could split the viewership on. It was really just an experiment. The Sam and Andy 'shippers are so strong, we were interested creatively to see what an alternative would look like and see if we could build that very slowly in a way that would actually change some people's minds. That relationship, even though Nick and Andy had nothing together last season, was always our intention.

Was their romance always intended to play out over the course of the entire season?

We haven't gotten the band back together for season five yet, but there's still lots of decisions to be made. I gotta be honest; [it's] not just the viewers [who are split] but the writers [too]. Lots of people think Nick and Andy are perfect together, and others are like, "No! It has to be Sam and Andy!" So we're enacting that debate within our own writing room. [Laughs] Which is why Nick has become a valid love interest for her. We've tried to write him seriously as that. It was never meant to be temporary but it was meant to be dramatic and an incredibly difficult decision.

Was there something that surprised you over the course of the season that you weren't expecting?

We've been lucky that most of our surprises have been fortuitous ones. You cast these smaller parts, like Holly, and it's always surprising to me how much you end up loving these little characters that we bring in. Suddenly we're writing more and more for them, they fly in to do more and more episodes and your budgets are getting out of whack. Our surprises end up being how much we love the new cast that we bring in. I think I was surprised by how much we ended up caring about Marlo. Giving her this mental illness that she was grappling with transformed her for all of us to somebody very, very human and who we had great empathy for as a character instead of a bad guy in a love triangle.

What can we expect in Thursday's finale?

They haven't caught the guy [Kevin Ford] at the end of last week's episode and he's got a serious beef with 15 Division, so he's hunting them. Police officers are usually the hunters. They're the ones out there looking for the bad guy and tracking them down, and in this case, to have it be reversed and have them being hunted, it's tense, scary, dramatic and dangerous.

In the promo, Kevin Ford makes his way into 15 Division and shoots Sam. Who else may be in danger now that the precinct itself is a war zone?

We were trying to explore the scariest thing we could imagine, which is home base being a danger zone itself with somebody. It's a sea of uniforms so when the bad guy manages to get into your work place, it's dangerous for everybody. In terms of other people who are caught up in this, you'll see in the tease that Oliver is at great risk in this episode too.

When I spoke to Charlotte Sullivan, she deemed the finale "gut-wrenching." Is that an accurate descriptor?

I hope it's gut-wrenching. It was to write it. I think it was for the actors to shoot it. I think that Missy Peregrym would say that there's a big moment in the last act that was probably one of the hardest [scenes] for her to shoot since we started the show and certainly was one of the hardest ones for me to write. You start constructing an episode with key scenes in your head and that was always one of them. I think it is gut-wrenching for everybody.

Where do Marlo and Sam stand at this point?

Realizing that she'd kept this secret from him and then him covering it up for her, those are places you can't come back from — at least not immediately.

Are you hoping to explore Gail (Sullivan) and Holly's (Aliyah O'Brien) relationship further?

To make that decision for a character four seasons in, we didn't want to it lightly and we wanted to do it respectfully and honestly and realistically. Charlotte has always thought her character was gay. From the very first season, she'd always say, "Is she gay?" We had it in our heads too. It's not something we're going to shy away from in season five. We think it's interesting.

By the end of the finale, are we to assume that not everyone makes it past the episode alive?

Because the episode ends in a very intense place, we actually have some choices to make at the beginning of season five. A lot could happen from where we end this. There is a lot of mayhem, there are a lot of people in that hospital and we'll see what happens.