Chaz Bono Shows Off Dramatic Weight loss On The Doctors 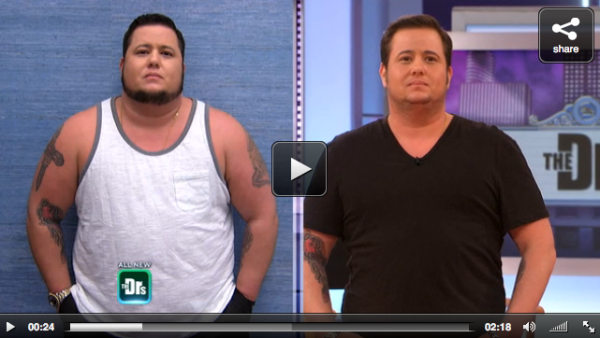 (The video won't embed. Go to the second source to check it out.)

Chaz Bono has met his weight loss goal! One year after weighing in at 250 pounds and being advised on The Doctors to lose "between 50 and 80 pounds," Bono returned to the show on Wednesday, Sept. 11, to show off his amazing slim-down. The 44-year-old son of Cher and Sonny Bono took the stage looking trim and toned -- but, most importantly, feeling good.

The Doctors helped Bono follow a healthy regimen beginning last November. When he first appeared on the show, Bono was warned about his dangerously high cholesterol, blood pressure and blood sugar levels.

The LGBT activist, who underwent a sex change operation in 2009, told The Doctors at the time that he felt "out of control" with his diet. "Now is the time," Dr. Travis told him. "Failure is not an option."

During a progress update with The Doctors in April, Bono confessed, "I'm not going to say it was easy, but I've had so much support. It's made it doable and up until now it hasn't been, so thank you."