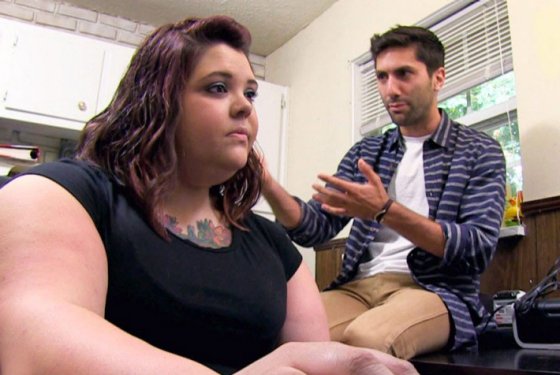 There are rumors that Catfish is catfishing us all, that the catfish is actually the one who reaches out to MTV for help instead of the catfished. I don’t really get how this purported reverse-engineering ups the drama, but think what you will, the point is: Last night it happened for real! The catfish called Catfish looking for help!

By the end of the episode, however, she was merely a catfish, not the catfish. That’s right, last night Nev and Max served up a double-catfish blue-plate special, folks.

Self-proclaimed hermit Ashley met Mike in a chat room seven years ago, when she was just an awkward 13-year-old looking for a friend. Though he didn’t show her any pics for like six years, she still felt this huge pressure to Photoshop her double chin and hips out of the photos she sent him. “Society, man,” she explained as to why she did it, adding that she was adopted by a family with two thin, pretty daughters. Her digital nipping and tucking, she thought, qualified her for catfish status, but Mike claimed to not even notice the differences when they met.

As it turned out, Ashley didn’t notice anything too fishy on Mike’s end because she was consumed by her own lies. Nev and Max came in and quickly pointed out that the three photos Mike sent her, were kind of absurd. We’re talking Mark McGrath circa ’98 frosted tips, 24-pack abs, stonewash Riders, shirtless and shiny — they do not look of this era. Ashley’s gullibility when it came to the photos was pretty much in flux the whole episode; she would text Mike things like, “I want to see those abs in person,” only to later claim that she didn’t believe that was actually him. It kind of seemed like she was trying to save face and downplay how quick she was to trust. Mike, however, was straight-up “noooo you believed those?” and claimed that he thought she knew that wasn’t really him. “She’s a smart girl,” he offered when questioned by Nev about his photos. Mike’s hesitance to meet Ashley stemmed from this, that much was clear. Nev and Max tracked down his sister, Gena, on Facebook and spoke with her on the phone before connecting directly with Mike. The questions they asked her, in hindsight, are sort of laughable – “Is your brother in, like, peak physical condition?” “Um, he’s private, you should ask him.”

Mike copped to sending fake pics before the time Ashley traveled from her home outside Atlanta to Piscataway, New Jersey, to meet him. At first she seemed relieved that Mike had also been lying about his appearance. “Maybe him not looking like a Ken doll will make me feel more comfortable,” she said. “I don’t care, I just hope he’s the same person.” The thing is, Ashley’s Ken-doll expectations clearly haunted her. After the initial rush of hugs and nervous energy (which seemed like love!), Ashley started to face the facts: She was not attracted to him. That’s a confusing moment for people who are deeply insecure about their own looks; they can feel like they have no leverage to reject someone else, particularly based on appearance. But attraction makes no sense, and it certainly has little to do with how you yourself look. Ashley seemed in the midst of an internal struggle over this throughout the episode’s latter half.

Meanwhile, Mike was declaring his love for her, saying that Ashley was the only girl who made settling down sound appealing, that he wanted her to meet his family. First she was backing away slowly, then she was a track-and-field star. “I really thought if she saw the real me, that would be it, she would be gone,” Mike had said one day earlier. That’s exactly what she did, first with “It’s not me, it’s you,” before quickly copping to the truth: “Nah, it’s just you.” Mike asked if this would be the last time they ever saw each other, to which she said, “Probably… I don’t wanna pretend there’s something there when there’s not.” Frankly, she was being cavalier about the whole thing, while Mike was so gracious and understanding. She did to him what she had hoped he would not do to her: make a snap judgment based on her appearance alone.

Now, people separated by 900 miles don’t just accidentally keep in contact for seven years, particularly between the ages of 13 and 20. Think about how many friends you went through from the ages of 13 and 20. This is typically a time period marked by both growth and insecurity in one’s life, so to have a constant companion through all that, I imagine, would create a strong bond. Unlike many couples seen on the show, Ashley and Mike grew up together online in the most literal sense of the word. Though it made for compelling TV, to see her throw it away just like that was infuriating.

Perhaps what was more infuriating, however, was to see Ashley change her mind. In the one-month follow-up, Mike told Nev and Max that Ashley would be visiting him soon in New Jersey to try things out. “He deserves a little more time, after seven and a half years,” she offered up. “He deserves a second chance.”

After the emotional roller coaster she put Mike through, it’s Ashley who deserves the second chance.

Ashley’s Delusion Score (out of 10): 6.2 – She totally believed Mike was the abed-up nineties dude in his pics. 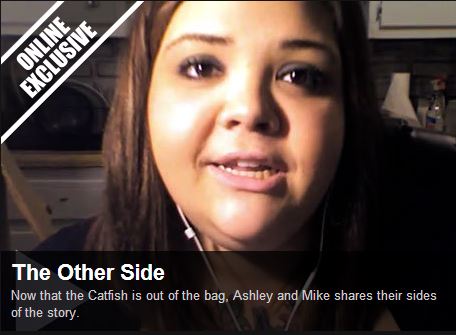