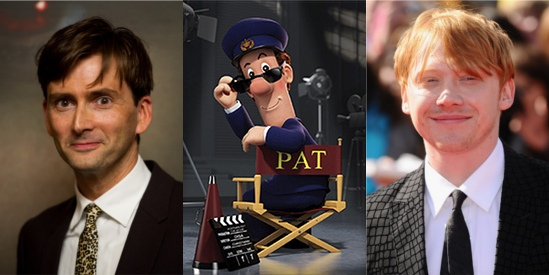 The Postman Pat animated movie, which includes David Tennant among its voice cast, has been pushed back to a 2014 release.

Both the UK Film Distributors Association website and the cinema advertisers' site DCM have now confirmed the release date as Friday 23rd May 2014. Previously DCM posted a date of 25th December 2013.

Postman Pat: The Movie – You Know You’re The One brings the classic kids' TV character for the first time to the big screen in a 3D spectacular with an all-star cast as Pat ventures into the world of TV talent shows. It features the voices of Stephen Mangan as Pat and Kate Winslet as Pat’s wife with David Tennant, Rupert Grint and Jim Broadbent. Take That star Gary Barlow will provide Pat's singing voice. David stated in a BBC Radio 5 interview last year that his character is a new one, and it is believed that he may play a Simon Cowell-type character, while Rupert Grint is a member of a competing boy band. And, of course, Jess the Cat will be on hand too.
The film is written by Nicole Dubuc, Kim Fuller and Annika Bluhm and directed by Mike Disa. It is being  animated by Jordan-based company Rubicon, who have said that they are now coming close to completing their work.