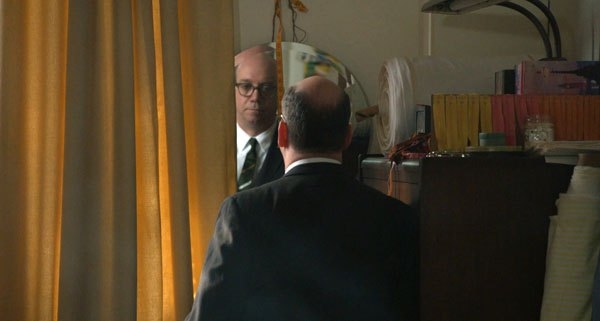 A few weeks back, one of our esteemed writers presented the possibility of Peter Landesman’s “Parkland,” the film recounting the day John F. Kennedy was assassinated, as a dark horse in the Oscar race later this year. Just announced to be released on October 4, Landesman’s film premiered at the Venice Film Festival in the last 24 hours and the word seems to be mixed to negative.

An all-star cast is assembled with Oscar-nominees Paul Giamatti and Jacki Weaver, along with Oscar-winners Marcia Gay Harden and Billy Bob Thornton, and Hollywood stars Zac Efron, James Badge Dale, Jackie Earle Haley, and Colin Hanks. Seemingly walking the line of past big ensemble pictures like “Bobby” and “Crash” from years prior, the film seemed to be a wildcard for the season. Looks as though that notion may be on serious life support at the moment.

By the few reviews that have hit the web, it looks as though if there’s any possibility for accolades, the underutilized and undervalued James Badge Dale, who has impressed in films like “Shame” and “The Grey” – seems to finally have a vehicle as Robert Lee Oswald, the brother of Lee. As we’ve seen in years that have included “The Paperboy,” it’s hard for the Academy to separate a great performance from a bad movie. There have been actors that have survived such backlashes like Stanley Tucci and Cate Blanchett, but unfortunately Dale hasn’t achieved such a pass from critics yet. Sam Rockwell still hasn’t done it.

Check out the words on the film down below:

Xan Brooks of The Guardian says:

If there is a tragic hero among this unhappy bunch, it may well be found in the unlikely form of Robert Oswald (James Badge Dale), the brother of Lee. Robert is smart and dignified; a cool head in the crisis; a moral compass for the film. But when the public want a scapegoat, it seems that he might fit the bill.

Parkland is a smart little tale from the sidelines of history, shot in the de-rigueur docu-realist manner and spiriting us from the blood-soaked operating theatre to the interior of Air Force One, where the seats must be unscrewed to make room for the coffin. At the end of the film a trio of gravediggers trudge onto the screen and start shovelling dirt. And yet it struck me that all of these characters (the medics and the cops, the agents and the hacks) are gravediggers of a sort. They come to clean up the mess so that the world can move on.

Another questionable decision is taken with regard to the famous 8 millimeter footage shot by amateur photographer Abraham Zapruder (Paul Giamatti). As reporters besiege Zapruder for rights to the footage, he meets with an editor of Life magazine and agrees to sell the footage to him on the condition that the most graphic frames are edited out. The editor tries to convince him that the omission will stir too many unanswered questions, but Zapruder persists out of deference to the President whom he revered. Giamatti gives one of the two strongest performances in the film; the disorientation he conveys is remarkably raw.

The other standout performance is given by James Badge Dale as the assassin’s brother. Perhaps the most revealing sections deal with the family of Lee Harvey Oswald. Landesman made a surprising but smart decision to focus a good deal of attention on Oswald’s brother Robert. There has probably never been another film that provides such an incisive portrayal of the impact of a horrendous crime on the killer’s family. Dale captures the mixture of shame and grief that characterized Robert’s stunned reaction, and one jailhouse scene between the brothers (with Jeremy Strong well cast as Lee Oswald) has just the right degree of tension.

Guy Lodge of In Contention/Hit Fix gives it a cold “D” but praises Dale:

The only figure in this waxen ensemble who emerges as something resembling a complex, conflicted human being is Oswald’s decent, stoic but tacitly ashamed brother Robert, a man in no doubt as to his sibling’s guilt but attempting to muster up enough unconditional love to understand his mindset. In the only performance here that feels porous and palpably damaged, James Badge Dale is given too little to work with to come close to salvaging the whole tawdry affair, but his efforts are appreciated all the same. As his vindictive mother Marguerite, meanwhile, Jacki Weaver goes to the opposite extreme, playing the woman’s horn-rimmed glare and hissing conspiracy theories for high camp value. It’s the cartoonish approach this material arguably calls for, but a distracting one when none of her blander co-stars apparently received the memo.

A painful retelling of the Nov. 22, 1963, assassination of President Kennedy in which the two least important players seem to be JFK and Lee Harvey Oswald, “Parkland” dramatizes the immediate impact of that tragedy on the lives of civilians, professionals and others tangentially involved. Comparisons with “Bobby” can’t be helped, since it took a similar approach to the equally shocking death of Robert F. Kennedy, though that film seems like a masterpiece compared with this inadvertently tacky restaging of events. Timed to coincide with the 50th anniversary of the tragedy, this Oct. 4 release will swiftly be forgotten in the face of more tasteful mementos.

There is one notable exception, and that’s James Badge Dale as Lee Harvey Oswald’s brother. For the fifth time in twelve months (following “Flight,” “Iron Man 3,” “World War Z” and “The Lone Ranger”), the actor feels like he’s in a different, and much better, movie than the one around him. As Robert Oswald, he underplays while everyone swings for the fences, neatly and efficiently capturing brotherly love, ordinary dignity and irrational guilt.

His stuff is by far the best thing in the film, and it would be tempting to suggest that a version of the film focusing solely on the Oswald family might be fairly effective, were it not for the normally reliable Jacki Weaver, who seems to have been told to play Oswald’s batshit crazy mother as comic relief. So ultimately, James Badge Dale can’t salvage the film that we like to think was conceived with good intentions, but comes across on screen as a cheap cash-in. [D-]