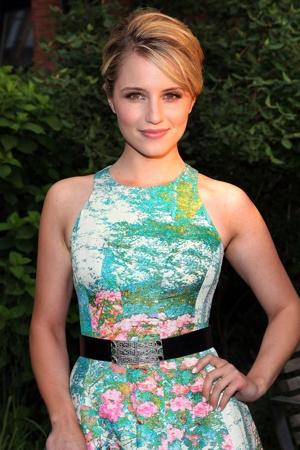 “This year I’ve had some of the biggest cries of my entire life,” she admits.

In July, her “Glee” co-star Cory Monteith (whose character, Finn, impregnated Quinn in the show’s first season) died, with authorities listing the cause of death as a combination of alcohol and heroin.

“It hasn’t completely hit in yet,” Agron says, her voice softening. “It’s one of the strangest things that has ever happened to me. I don’t know how people do it over and over again throughout their lives. It just makes you take a new lease out on life and look at things a little bit differently.”

She pauses to take a breath.

“He was truly one of the most wonderful people I’ve ever met in my entire life, and that’s something that everybody can say about him, you know?”

“Glee” showrunner Ryan Murphy announced that the third episode of the upcoming season, which debuts Sept. 26, will be a tribute to Monteith and his character. Agron, who was reduced from a series regular to appear in just three episodes last season, was not asked to participate in the memorial show. In fact, the actress isn’t certain she’ll be back at all this season.

It’s a surprise, given her formerly pivotal role.

Time to move on to bigger and better projects?

“I think moving on might be the wrong choice of words because [“Glee”] is always going to be a part of me and with me and I would always go back,” she says. “So it’s not necessarily about a departure. It’s about what it’s imparted in me and what it’s given me.

She says she’s still close with all her “Glee” castmates, especially after Monteith’s death. And for now, she seems content to focus on her personal life, her new adventures in “The Family” and her hopes for Hollywood success.

But one thing’s for sure: no more cheerleading roles.

“I always say, ‘never say never,’ ” she says, laughing. “But I truly believe I have exhausted the cheerleader that I never was.”

What do you guys think about Ryan's decision to not include Dianna? Quinn was an important character the first season but then again they did ruin her character after she started getting movie roles.