'12 Years a Slave' is a sure-fire Oscar contender 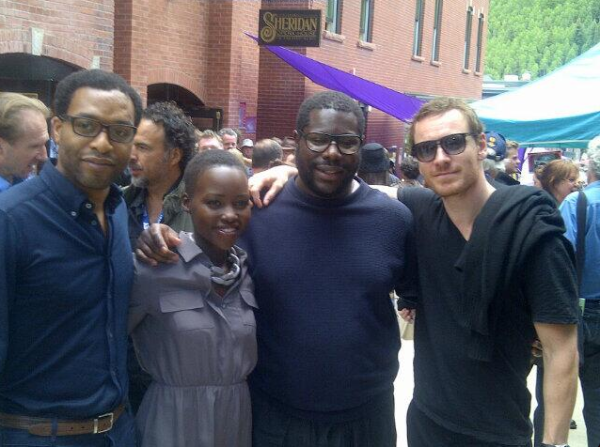 TELLURIDE, Colo. - Fox Searchlight was smart to get into business with filmmaker Steve McQueen two years ago when, just after screening his last film, "Shame," here at the Telluride Film Festival, they acquired it for distribution. Further dividends will be paid in the sterling accomplishment of "12 Years a Slave," to be sure.

It wasn't just the sound of sniffles but open bawling that could be heard throughout the Werner Herzog Theater today at the second screening of the film. It is every bit as emotionally devastating as you've been led to believe so far and it is a first knock-out awards contender, firing on all cylinders with nominations to be expected across the board.

McQueen had been wanting to make a film about slavery for some time and was always looking for an in. He had the idea of a free black man kidnapped into slavery and started working on a script with John Ridley (whose work on the page with this vintage dialogue is absolutely exquisite). McQueen's wife suggested a book he had never heard of, an autobiography of just the sort of character he had in mind written by Solomon Northup and "12 Years a Slave" started clicking to life.

"As soon as it was in my hand, I couldn't put it down," McQueen said of the book in the post-screening Q&A. "It was just riveting. Every page I turned, I just couldn't believe what I was reading. I live in Amsterdam and for me it was like reading Anne Frank's diary for the first time. And 99% of people I spoke to had never heard of it. It was a passion."

Meanwhile, Brad Pitt and his "little garage band of a production company," as he put it -- Plan B -- had made it their mandate from the beginning to work with directors who they thought had a unique and special voice. McQueen certainly qualified, as this was coming off of "Hunger" with Michael Fassbender (who also stars in "12 Years"). A little choked up talking about the material and the experience working on the film, in which he also has a small part, Pitt said he wondered why there weren't more movies about slavery and found it intriguing that it took a Brit to make something such as this.

"I just want to say that I am so humbled and so proud to be a part of the film," Pitt said. "This is why I wanted to get into film, films like this that I watch and have such an emotional and transformative experience. I don't know about you guys but I find it difficult to speak afterwards. These fine performances -- I know what it takes to get to where these guys got to. It's an incredible feat."

Indeed, Chiwetel Ejiofor offers a stunning portrayal that shoots right to the top of an already crowded and competitive Best Actor Oscar race. A character actor who has cranked out head-turning work for years, going back to at least "Dirty Pretty Things" (and probably farther, but that's when I first sparked to him), he has been due a role such as this for quite some time. He makes everything of the opportunity, giving a performance of raw intensity at times and tranquil beauty at others.

"I just wanted to try and investigate this person as much as I could," Ejiofor said of Northup. "I found the story so beautiful as well as having all of this sort of trauma in it. There's this incredible spirit that this man had and trying to capture that and tell the story within the paradigm of that narrative was something I wanted to achieve."

Speaking of making the most of an opportunity, Fassbender was quick to note how impressed he was by newcomer Lupita N'yongo, who revs into an equally intense portrayal. "She came into the first rehearsal that we did and she just gave it everything and had the courage to lay it on the table, and perhaps fall flat on her face, but go for it," he said. "I was like, 'Shit, I better do my homework. This is the hunger of somebody new, somebody seeing the opportunity and taking it with both hands.'"

Fassbender's work in the film is one of seething villainy, not unlike Ralph Fiennes in "Schindler's List." His brutal slave owner haunts the screen, as terrifying in bursts of violence as he is in smoldering silence. All three of these actors deserve to be in the awards conversation throughout the rest of the year, as, frankly, does Sarah Paulson as Fassbender's daintily vicious wife.

I found the film incredibly moving and yet another example of expert craft from McQueen. He's collaborating with one of the most talented cinematographers working today, Sean Bobbitt, and together they frame this story in profound ways, patient with the camera. Design elements are perfectly realized, from Patricia Norris' costumes to Adam Stockhausen's production design. Hans Zimmer's score often plays to what this is, an American horror story. However, in the more delicate areas, he rather distractingly borrows from his own work in "The Thin Red Line" and "Inception."

The only other complaint I could muster with this is that, like my colleague Greg Ellwood, I felt the passage of time wasn't all that well presented. For a film called "12 Years a Slave," it would have been valuable to really feel how epic this story is. That's not to say it isn't epic in its own way, but before long you start to forget how long this is supposed to have been. Then again, that could be partly the point; surely time bled together for Mr. Northup.

Expect to be hearing plenty more about this one as the year unfolds. It's a towering achievement from all involved.