Gaga's interview with the Sun 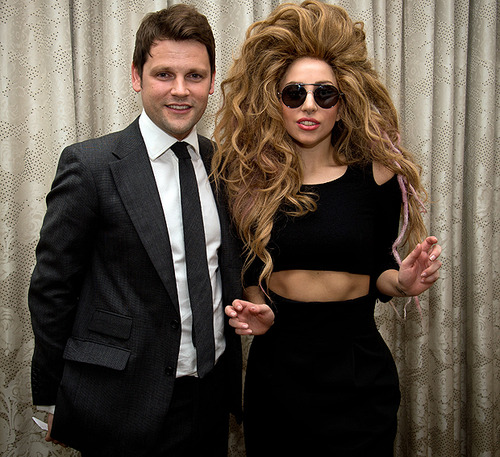 There are two people in London this weekend with completely different views on how to spend money. Lady Gaga is appearing at the iTunes Festival in the famous roundhouse with a production for 3,000 people costing almost £500,000 for one show. Meanwhile Arsenal football boss Arsene Wenger has a £70million war chest to entertain 70,000 people but won’t spend a penny. I went to see Lady Gaga at the plush Langham Hotel yesterday and asked what she would do if she had that amount of money. In her only newspaper interview she laughed: “Do I know anything about soccer? Have I been keeping up with Manchester United or Chelsea and who is on their roster? I’ve got some other interests at the moment so not closely. I would not spend the money on an athlete. It is hard to say I do have a tremendous amount of respect for top footballers – as you call them – they deserve the big money. If I had this guys money I would enjoy it – do something really silly. I would make sure ALL of it was spent on new uniforms. A few shells maybe."

“I am playing seven new songs but I’ve kept some back for later on this year. I am just so relieved to be back playing new music. I spent a fortune on rehearsals because I want things to be right for the big night, the Roundhouse is a famous venue and I want to make it special for my fans. It is meant to be an intimate record – the next album will scale up and down live. It can be huge, and then I can strip it right back. When I had surgery I really missed being on stage and I have missed the applause. That is an incredible feeling, knowing the audience is happy. When I have done that, thats when I am happiest. I haven’t missed the fame or attention with all the rest of it. I really enjoyed the downtime because it rejuvenated my creativity and I figured a lot about myself in the past year. I realized i am not in it for the fame. I don’t need to go out and be recognized to feel alive. I do miss being onstage singing, and dancing, but didn’t miss getting dressed up. I still got dressed up, I just did it in my apartment, I did that for just me.”

“I think what will surprise people most about this new album and Sunday is that I know I am part of an era of artists and celebrities who are obsessed with fame in that way, but I am all about the music and the fantasy of performance. I am a student of Bowie, Bolan and Freddie Mercury. If we could get in a time machine and go back to see what they were doing, they would be doing the exact same thing.

Gaga on Elton John: “I can’t even reference Elton as an inspiration anymore because I love him in such a deep way. His boys are so beautiful, it's a privilege to be their godmother.

Gaga on William and Kate: I don’t know them, but I am a big fan of the Royals – They will do a lovely job at being parents”

Gaga on One Direction: “I can’t put the One Direction boys in order of my favourites, they are all equally cute in my book. Those boys are very special indeed, they are down to earth. I met them at the VMA’s and they are really nice guys. They are totally in it for the right reasons and I love to see that.

Gaga on Miley Cyrus: “I don’t like to pass judgement on Miley. Generally, people need to lighten up about pop music, its about entertainment. It is here to make people happy. Especially in America there is an excessive dragging of female artists and I don’t want to contribute to that. I do things that are polarising sometimes, but thats what its all about.”

Gaga on Human Rights: “I don’t think we should be going to Russia for the winter Olympics, thats my personal opinion. I care so much about these issues and I don’t think we should be bringing any commerce to a country which enforces such a lack of equality and a lack of human rights. A country where so much abuse of youth is happening, how can we bring so much attention to that part of the world and reward them for that? For me it’s shocking, then again everyone thinks Miley Cyrus is shocking and thats the world we live in…”

Gaga on being an authentic performer: “The internet has become a veil of music and the artist. I want to push through the boundaries of that and break through the wall with our monster paws and fists. Its fun, not everyone has to be serious all the time. The trust is people take me too seriously and not seriously enough half the time. I do it purely for the joy of being a performer.