"I did not look as much like Pamela Anderson as I had hoped I would."

– Kristen Bell, on donning a similar Baywatch red swimsuit for her new movie The Lifeguard, to Vanity Fair

"Look at me doing all the talking while you sit there doing nothing. I feel like I'm cohosting the Oscars with you."

"It's really kind of amazing the powers that this man has. I mean I was actually becoming a little submissive myself."

– Josh Duhamel, who enlisted the help of Dog Whisperer Cesar Millan to help dachshund Zoe prepare for her new brother, on The Tonight Show with Jay Leno

"I always hope that I'll know when I no longer need to show my breasts for good. Like I'll know when to pack it in and put a bra on. That is my prayer to the universe."

– Lena Dunham, on when she'll be able to cover up on the small screen, to Marie Claire UK 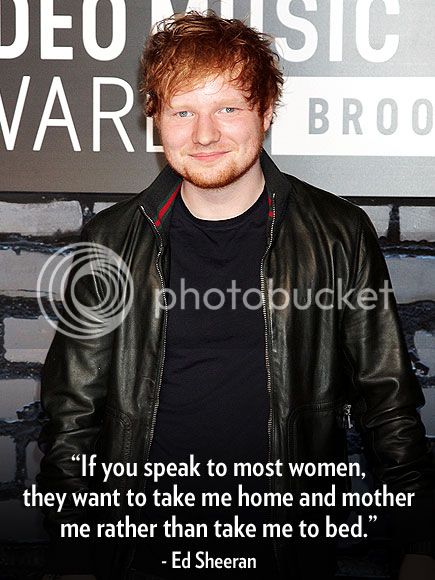 "If you speak to most women, they want to take me home and mother me rather than take me to bed."

– Singer-songwriter Ed Sheeran, on the attention from his female fans, to PEOPLE

"You know, he's not playing King Lear. It's Batman!"

"I was not expecting her to be putting her butt that close to my son. The problem is now I can never 'unsee' it."

Open to: All, detailed results viewable to: All. Participants: 273

Which celeb had THE BEST quote this week?