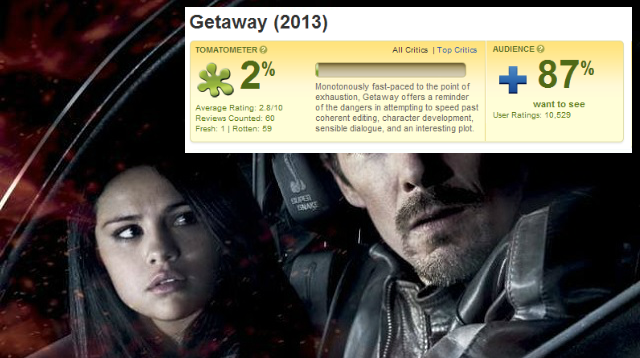 2/5 | "If you can't even deliver blatant car-nography, what's the point?" - Nick Schager (Time Out New York)
1/4 | "It's hard to remember another action entry that expends so much energy on frenetic blacktop choreography and attention-deficit editing with so little to show for it." - Tom Russo (Boston Globe)
1.5/4 | "Getaway might have been enjoyable as a mindless bit of dumb, late-summer entertainment if it had been vaguely coherent." - Christy Lemire (ChristyLemire)
1/5 | "[A] video game posing as a movie, a preposterously plotted kidnapping story starring a high-performance Mustang." - Sheri Linden (Los Angeles Times)
0.5/4 | "Getaway" could have been an excellent two-minute film." - Stephanie Merry (Washington Post)
0.5/4 | ""Getaway" is so bad that what's most surprising about it is that Nicolas Cage didn't manage to star in it." - Kyle Smith (New York Post)
1.5/4 | "As a moviegoer, I am not against car chases, but I generally like some movie wrapped around them." - Cathy Jakicic (Milwaukee Journal Sentinel)
1/5 | "One can only guess why Ethan Hawke felt compelled to make a high dive from the sublimity of "Before Midnight" into the twisted rubble of "Getaway." - Stephen Holden (New York Times)
1/4 | "A car-chase clunker that can't escape its own noxious emissions." - Scott Bowles (USA Today)
0.5/4 | "The only real benefit of Getaway is pointing out the likely winners of the next Razzie Award for Worst Screen Couple. Come on down, Hawke and Gomez, you certainly deserve it." - Peter Howell (Toronto Star)
1.5/5 | "Maybe the title isn’t a title, but an instruction: ‘Getaway,’ away from this movie, and fast." – Bill Goodykoontz (Arizona Republic)

The movie is set to become the worst reviewed movie on Rotten Tomatoes if it says at 0%. The best-reviewed film the site has ever seen: "Toy Story 2," which came out in 1999 and remains at 100% with 161 notices.

You can read the rest of the reviews here.

Did you get a chance to see "Getaway"? What's a movie you regret paying for?