Mutya Keisha Siobhan, now Suga-free :"The decision is OURS, we don’t need the (original) name!" 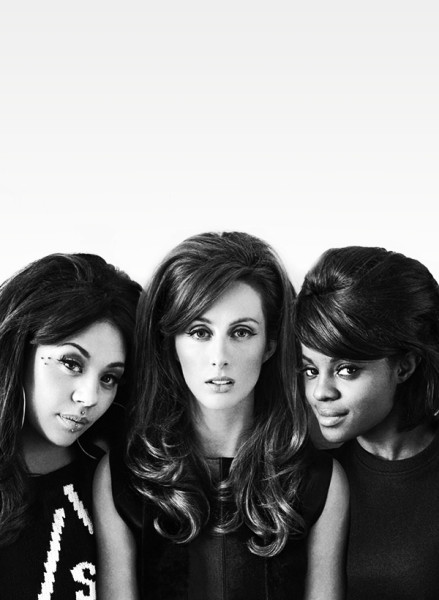 After 15 years they would rather forget, Mark Ellen witnesses the rebirth of the Sugababes as Mutya Keisha Siobhán.

Mutya Buena, 28, has six facial piercings, a stud in her tongue, a silver tooth and a tattoo of a clock face frozen at the time her daughter was born — 18 minutes past three. She’s so permanently decorated she refers to her arms as ‘sleeves’, as if they were ornamental clothing. There are roses inked all over them, and Latin prayers and the words ‘NEVER SATISFIED’. The two gemstones on her collarbone are attached with ‘implants’, metal plates embedded beneath the skin.
The message is fairly clear: she has drive, belief and intense commitment — all of which might come in handy as she’s now sitting in a Camden rehearsal studio with two former sworn enemies, Siobhán Donaghy, 29, and Keisha Buchanan, 28. They’re back together, even though their time in the Sugababes was so famously fractious it made The Supremes look like one big hen party. I’ve interviewed countless acts who claimed their relationship was as good as it ever was — Bananarama and the Backstreet Boys among them — but this is something else: a group that never got on in the first place who seem to have kissed and made up.

Sugababes was put together by All Saints manager Ron Tom in 1998; Mutya and Siobhán were joined by the former’s best friend Keisha, when all three of them were 13. At the ripe old age of 16, Siobhán bailed, circulating tales of heavy-handed control, vicious internal catfights and ‘bullying’ by the iron-willed Keisha. In the blunt and efficient world of girl groups, a cross between a theatre show with understudies waiting in the wings and a football squad with substitutes warming up on the touchline, the London-born redhead then had to sit back and watch the act she’d co-founded rocket to international success — ‘Hole in the Head’ and ‘Push the Button’ achieved 700,000 sales in the UK — with her own part now played by Heidi Range, formerly of Atomic Kitten.
Four years later, Mutya resigned. It wasn’t easy, she says, having to juggle tour rehearsals with exam revision, or recording until five in the morning when breastfeeding a baby. She left aged 19, sensing her days were numbered and her replacement already trained up: two days later the new Sugababe was announced, a stage-school siren called Amelle Berrabah.
At least Keisha lasted until 2009. By then, the group was a multimillion-pound empire who’d supported Coldplay at Glastonbury — the first girl pop act to play its Pyramid Stage — and had a vast merchandise wing that included dolls and footwear. Fanned by reports of her spats with Berrabah, Keisha was shown the door (exchanged for Eurovision Song Contest trouper Jade Ewen), amid complex legal wrangles over the ownership of the band’s name.

The three original Suga-babes are now hopping about nervously, offering to make tea and loudly singing each other’s praises, flying the flag for unity and solidarity. The whole thing has the strange, cautiously excited air of a school reunion, three girls with bad memories of the place, but who now have something powerfully bonding in common.
Asked why the group was a hotbed of discontent, they paint pictures of a world entirely controlled by ‘the adults’, a shape-shifting army of management, parents, guardians, minders, label and studio personnel. If you’re given the impression that your band is a brand and its three members just replaceable units, it doesn’t tend to make for warm interpersonal harmony.
‘Looking back,’ Siobhán says, ‘there was a lot of divide and conquer going on. The adult world around us wanted to manage the environment and make it a business, and maybe forgot we were young and our happiness was important. We were teenagers. We weren’t even old enough to drink! They saw us as interchangeable — it was all about the band, not the individuals, and that’s not good for your self-esteem.’
‘We were home-schooled,’ Mutya adds, ‘and that created a lot of pressure. We were just too young to appreciate it. We didn’t realise our music was credible. “You’re number one!” OK, can I go home now?’
‘As a teenager you feel insecure and frustrated that your voice isn’t being heard,’ Keisha chips in. ‘It’s all hormones and stuff like that and I didn’t know how to express myself, to be honest, as I was only 13 years old! I felt constantly misunderstood. Now we’ve been able to rebuild a fresh new adult relationship where we’re clear about how we feel about things. There’s none of that suspicion that “you’re just here to get famous off me”.’

The legality of the situation is still tangled. Pink Floyd and Black Sabbath were both embroiled in court cases about the use of the brand name without certain founder musicians involved, and when 1960s soul duo Sam & Dave split up, Dave toured with a brand-new Sam — though the only people who complained were the ticket-buying public. But when a version of Fleetwood Mac set out in 1973 without a single original member in its line-up, m’learned friends soon pulled the plug.
The Sugababes saga is more complicated still. Through her long tenure in the band, Keisha retains some rights to the group name but chose not to state her case. ‘I wanted to stay positive and show we’ve got a new team,’ she says. Siobhán and Mutya insist they could use the name, too, if they wanted, but elected against it — partly, I suspect, because it wouldn’t show much sisterly support for the three girls who replaced them and kept the brand alive, though it’s anyone’s guess whether the current band actually still exists. - RIP, best wishes, Heidi!

‘It’s our decision and we don’t need the name,’ Keisha declares, adding with a hollow laugh that there was a richly ironic interview with Mutya when she was 16. When asked why they’d called the group the Sugababes, she said, ‘Well, we’re not going to call it Mutya Keisha Siobhán as that’d be ridiculous!’

Mutya Keisha Siobhán take the stage in this tiny studio to rehearse the new single ‘Flatline’ to an audience of two. It’s a weather-beaten slice of pop soul about a fading love affair, a lot more knowing and less polished than the shimmering singles of their youth. They step up to their microphones, they move in sync, they harmonise, they swap wide-eyed sideways looks of delight. Their backing band fires up the riff to Gary Numan’s ‘Are Friends Electric?’ and they steam into ‘Freak Like Me’, Siobhán now singing the Heidi Range lead part as she did at the well-reviewed Scala gig earlier this month. I sit and watch from the balcony, fascinated, at a whole new chapter in a soap opera that’s rolled on for 15 years — more than half their lives. The standard cliché is about a lost childhood, but I can’t help thinking that this is the reverse: three people who had their childhoods extended by never being allowed to be independent. If they lost anything, it was their adulthood. 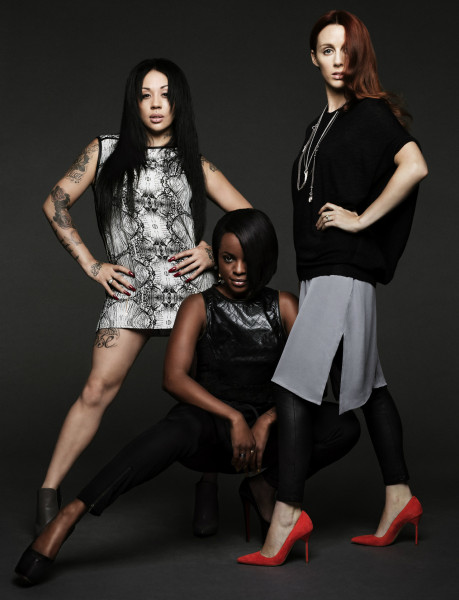 But you can see why they want to give it another whirl: they don’t feel responsible for the miseries of the past, and the three of them together is their most commercial option available. Working with producer Dev Hynes — aka Lightspeed Champion, whose past projects include Florence + The Machine and the Chemical Brothers — and with contributions from Emeli Sandé, Shaznay Lewis and William Orbit, they recorded enough material to give them a lever in negotiations, signing last year with Polydor ‘with no name and on the strength of our vocals and body of work’. Siobhán and Mutya were the prime movers in the peace process, but the key, still-smouldering bridge to repair was between Siobhán and Keisha.
‘That was so strange,’ Siobhán admits. ‘We met up in The Lanesborough. The last time we’d seen each other we’d been teenagers in our tracksuit bottoms having KFC and our parents were there, and here we were having this fabulous dinner and cocktails. We were quite shocked to find we got on really well.’
When she’d been in the Sugababes, their chart rivals were Blue, Steps and S Club 7, and they were trying to make singles with ‘an edge like All Saints’. (- OMG Remember it? My local radio station sometimes still plays "All Rise" lolllll -) The second Siobhán left she’d hurled herself into adult life, booking models for the Storm and Union agencies and taking charge of girls the same age as she’d been when she was in the band. ‘I took that responsibility very seriously,’ she says pointedly. ‘I want to morally respect that.’ She released a few records under the name Shanghai Nobody — a clever anagram of Siobhán Donaghy — and in 2007 took the role of Mimi alongside Denise Van Outen in Rent at the Duke of York’s Theatre, a ‘notoriously hard sing, 26 songs a show with matinées on Fridays and Saturdays’. In January she married her long-term boyfriend, financier Chris McCoy.
Mutya released some solo records, including ‘Song 4 Mutya (Out of Control)’ with Groove Armada, split up with Jay, the father of her child, and got stuck into various profile-sustaining TV slots such as Alan Carr’s Celebrity Ding Dong, but salvaged some dignity by walking out of Celebrity Big Brother 6 after 15 days of incarceration. ‘There’s cameras behind the mirrors,’ she shrugs. ‘Cameras when you go to the toilet. You have to wear your mike 24 hours a day, you even have one hanging down over your bed. You’re not too sure what the time is and if you get your rations taken off you, you lose control of yourself. Sometimes I get bad rashes and eczema and I was sitting there with my hoodie up to cover my face… and I just missed my daughter so much. So I left.’
Keisha’s four years since leaving the band have been filled with the gradual, tentative assembly of Mutya Keisha Siobhán, the news of their evolution artfully drip-fed via Twitter and Instagram by the girls themselves. ‘I think we’ve made a BANGER people #studio with @devhynes,’ Keisha tweeted when they’d finally finished the album. What advice would they give anyone starting out as young as they were?
Keisha: ‘Know your worth to the band. When you’re sad, express that. When you’re happy, express that. Be open. Be transparent. Compliment other people.’
Siobhán: ‘Be strong enough to be yourself. Don’t let people divert you too far from that path because the minute you do, you’ve moved an inch and then you’ve moved a mile, and then you don’t know who you are or what you’re doing.’
Mutya: ‘Make sure you have the right support and backing. Take your time and remember talent never dies.’
Would she let her daughter go into this business? ‘Never.’
SOURCE
the photoshoot is awesome, i been adoring siobhan's effortlessly elegant style lately but my fave would have to be keisha's pink jumper in the 2nd pic!
I also think this is a very interesting read not just for MKS fans like me but for people in general who like girlbands / boybands / teen pop stars. Many good quotes here - what are your favourite ones? Mine, as i hinted, came from the Q U E E N Mutya!
And, remember - Flatline is out September 15th! Click here to watch the video if you haven't :)
Tags: british celebrities, music / musician, music / musician (pop), music / musician (r&b and soul)
Subscribe