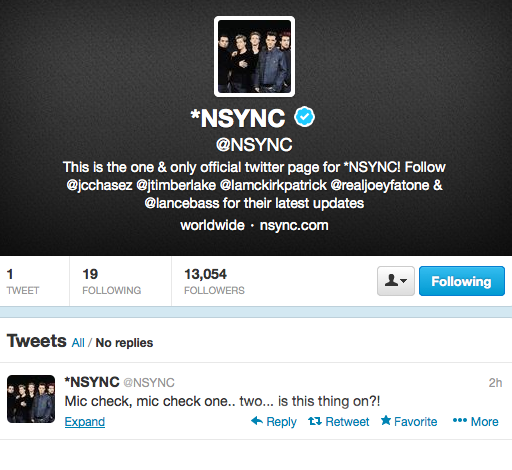 The boy band sent out a cryptic message Saturday, ahead of a rumored reunion at the Aug. 25 awards show.

Boy band 'N Sync has joined Twitter a decade after splitting up and one day before a rumored MTV Video Music Awards reunion.

"Mic check, mic check one.. two... is this thing on?!," read the lone tweet sent out Saturday afternoon.

The 'N Sync account, verified a few hours after the tweet was posted, adds fuel to the fire that Justin Timberlake, J.C. Chasez, Lance Bass, Joey Fatone and Chris Kirkpatrick will take the stage together during the televised Aug. 25 event. (The 'N Sync official page links to the fivesome's various online websites.)

The setting would be appropriate, as Timberlake -- who was announced as one of the VMA performers earlier this month -- is also set to receive the Michael Jackson Video Vanguard Award, the VMAs' version of a lifetime achievement award. This year, Jimmy Fallon will present Timberlake with the honor.

During a recent SiriusXM radio show Dirty Pop With Lance Bass, Bass neither confirmed nor denied the 'N Sync reunion, only explaining how the rumor spread on the Internet like wildfire.

In a 2012 visit to The Hollywood Reporter video lounge, Chasez — then a judge on MTV's America's Best Dance Crew — explained why a 'N Sync reunion was likely not going to happen. “It’s just not in the cards,” he told THR at the time. “I’m sure that everybody in my group has been asked at one time or another -- I know I get asked, I know the other guys get asked -- but we’re happy with what it was and we’re happy to move on.”

The VMAs will take place at Brooklyn's Barclays Center on Sunday.

N Sync reunion at the VMA's? This might make Justin Timberlake the greatest philanthropist of all time. Talking bout giving back.

frickinawesome7
August 25th, 2013, 02:06 am
Interesting. It can't wait to watch it on youtube because there is NO FUCKING WAY I am going to watch the VMAs for 3 fucking hours.

itakebacksunday
August 25th, 2013, 02:31 am
i cannot fucking wait! i haven't been this excited for something in a LONG time.

chenoweth
August 25th, 2013, 03:04 am
My dad likes to always remind my sister and I how we could have went to the free concert they did on Clearwater beach a year or so before they made it big. Cut to a year later and we made my poor dad wait in line at 3am for tickets.

theconsortiumxf
August 25th, 2013, 03:29 am
Not EVEN gonna fucking lie, I've been blasting NSYNC videos all fucking day and dancing around my house like a fool. I've burned at least 500 calories.